Our client, age 25, had been drinking heavily at Tower 12 in Hermosa Beach, right on the north side of the Hermosa Beach Plaza.  It was 1:00 a.m. and she was heading home.  She was working full time, but also attending classes to one day become a registered nurse.
As she was heading home, she stopped in a local convenience store on Pacific Coast Highway to just get a bottle of water.  When she walked in, she allegedly told the shop owner to “lock the doors!”  The shop owner thought this was odd and so he watched our client closely as she walked around the store.  As soon as he could tell she was quite drunk, he called the Hermosa Beach Police Department, who arrived at the store within minutes.
The police approached our client, still in the store and asked her for her name.  Our client refused to provide her name “without her lawyer present.”  Police then tried to handcuff her and she wiggled away several times before police finally got one cuff on one of her arms, only for our client to then drop to the mini-mart floor to prevent them from putting on the other cuff. 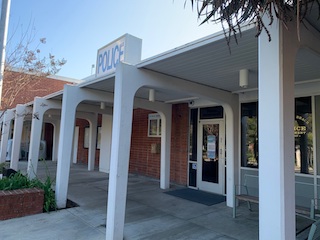 Hermosa Beach Police Department
Finally, officers were able to close on the cuffs on her other wrist and took her to the Hermosa Beach police station, holding her on two counts of obstructing, delaying and resisting arrest (Penal Code § 148(a)(1)) and one count of public intoxication (Penal Code § 647(f)).
When the client was released in the morning, she called Greg Hill & Associates, panicked that this arrest and the charges would bar her from being eligible to eventually become a registered nurse.  Greg asked her about the facts of the case and what injuries, if any, the officers suffered.
Greg then commented that he thought the resisting arrest charges were secondary to the public intoxication charges as the fundamental conduct that the arrest was really based upon, although the officers certainly did not enjoy having an uncooperative person wiggling around and dropping to the floor to try to avoid being handcuffed.
Greg suggested that the client attend ten Alcoholics Anonymous (AA) meetings before the arraignment so Greg could take proof of this to the arraignment, in hopes of moving the case toward resolution with diversion or an infraction.
By the time of the arraignment, however, the client had not attended any AA meetings.  She explained that she was too buy and apologized.
At the arraignment, the Redondo Beach City Prosecutor handling the case for Hermosa Beach told Greg the plea bargain it was willing to offer was a plea to obstructing, delaying and resisting arrest and in exchange, the client would be placed on two years of informal (or summary) probation, 30 days in county jail, payment of the $358 Hermosa Beach booking fee and 10 AA meetings.  The prosecutor said this was a “bad case” wherein our client created a scene and delayed her arrest.
In response, Greg said that the case seemed like a text book case of disturbing the peace and perhaps just public intoxication.  He explained that our client was hoping to become an RN one day and was taking classes in such a curriculum.
At the second appearance in the Torrance Superior Court, Greg negotiated the 30 days of county jail to just 20 days of community labor, which the client was very happy with as she worried about missing work and classes if in county jail.  Greg also persuaded the Hermosa Beach City Prosecutor to allow a plea to Penal Code § 647(f), public intoxication, instead and to shorten the probation period to one year.
The prosecutor, however, was unwilling to offer any form of diversion.  The deal also required our client to attend 15 AA meetings, however, both counts of resisting, obstructing and delaying arrest were dismissed.
The client agreed to the sweetened offer, happy that she could request early termination of probation at six months if she had paid the booking fee, performed all 20 days of community labor and attended the 15 AA meetings.
Once probation was ended, she could seek expungement of the conviction.  Greg cautioned her that expungement did not remove the record of the case from her criminal history, but it at least showed the last plea as “not guilty” and showed the case was dismissed.
For more information about obstructing, delaying or resisting arrest please click on the following articles:
Contact us.
Serving Torrance, Long Beach, Compton, Airport Courthouses and Other Courthouses.