Our office represented a boyfriend and girlfriend who went to the Redondo Beach Beachlife Festival near the Seaside Lagoon in May, 2019.  The boyfriend was 22 years old and his girlfriend was 20.  The two were interested in just enjoying the music, having a hamburger or two and being at a place where everyone was having fun.  There was going to be beer on tap from Coors Banquet, Coors Light, Hop Valley Brewing Company, Saint Archer and others.
At least five undercover officers from the California Department of Alcohol Beverage Control (ABC) also went to the festival, but not for the same reasons.  They were interested in ensuring beer was sold and consumed only by those age 21 and older.  While the festival gave colored wristbands to those 21 and older, it was easy for someone over 21 to buy a beer or two and simply hand it over to someone under 21.
Our clients appeared to do exactly that.  According to the ABC report, our 22-year-old client walked up to the beer dispensing area and ordered two beers.  He was handed both beers and immediately handed one to his underage girlfriend, who officers claimed then took a sip.  ABC officers allegedly filmed this on a hidden camera and thereafter immediately spoke with our clients. 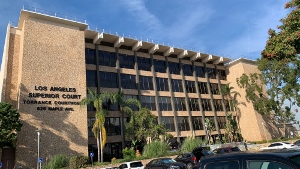 Torrance Courthouse
The officers asked for our male client’s identification and he provided it.  They then requested the same from our female client, who did not have her driver’s license with her.  She then gave the officers her name, but they misspelled it when calling back to verify her identity.  Because of the officers’ misspelling, they could not find her name in any database.  This cause them to conclude that our female client was lying about her name, although she gave her correct birthdate, which is perhaps more important in the context of underage possession of alcohol.
Officers then issued a ticket to our male client for a violation of Business & Professions Code § 25658(a), furnishing alcohol to a minor.  A similar ticket for violation of Business & Professions Code § 25662(a), possession of alcohol by a minor, was issued to our female client.
ABC officers added to their police report that our male client explained his conduct as “we were just trying to have fun,” which neither of our clients said.  We find this type of gratuitous fabrication by police quite often and it can be perhaps the most memorable and conclusive part of a police report.  We believe police recognize this and when adding such an alleged quote, they commit misconduct by fabricating evidence.
The clients came to our office quite distraught two days later.  Our male client worked for a post-production company for commercial movies.  He was one of 500 employees there and working his way up the seniority ladder, so being on probation and having a misdemeanor conviction for anything would compromise his future.  Our female client was a student at Santa Monica City College and working full time in a small clothing boutique in Marina Del Rey.
Greg listened to the clients describe what had happened.  Our female client was scheduled for wisdom teeth surgery the day after the Beachlife Festival, so she was under strict orders from her dentist not to drink any alcohol the day before.  She was really just holding the beer for her boyfriend while he put his wallet back into his pocket, she explained.  Our male client explained that he always ordered everything in bulk, so he bought two beers for himself because he did not want to return to the long line to buy another beer.
Greg commented that his goal in this case would be to help the clients avoid a conviction for a misdemeanor and being on informal, or summary probation.  Greg stated that, ideally, the Redondo Beach City Prosecutor would allow some form of diversion, wherein the case would be dismissed if our clients did certain things.
To reach either of these goals, Greg recommended that each client enroll in and take the LEAD (Licensee Education of Alcohol and Drugs) course, either in person on online.  It is a four-hour course that is free and when one completes the class, offered by the California Department of Alcohol Beverage Control no less, he or she receives a nice certificate that Greg could take to court to show the prosecutor.
Greg also recommended that each client attend five Alcoholics Anonymous (AA) classes and write a short essay on why it is illegal for someone under 21 to consume alcohol.
The clients did everything Greg recommended prior to the arraignment and provided him with the certificates of completion of the LEAD class, the AA sign-in sheet to show five AA’s attended and their separate short essays on why alcohol is illegal for anyone under 21.
Greg then appeared in the Torrance Superior Court for the clients’ arraignment.  The Redondo Beach City Prosecutor’s initial offer was no diversion.  She had specifically considered diversion and concluded it would only enable this type of conduct in the future.  She wanted convictions.  Her initial offer was that each client would have to enter a plea to a misdemeanor, be placed on 36 months of informal (summary) probation, pay a court fine of $250 plus penalties and assessments (about $1200 total) and perform 24 hours of approved community service.
Greg was shocked at the severity of the offers.  Greg then discussed the case with the prosecutor and showed her each of our client’s certificate of completing the LEAD class, the five AA’s and the short essay.
Greg then suggested that the case be granted diversion so each client could avoid a conviction and avoid being on probation.
The prosecutor rejected this suggestion, but agreed to amend the complaint to allege only an infraction-level violation of Penal Code § 415(2) (“disturbing the peace by making a loud noise”), on condition that our clients perform 24 hours of community service, and, on Greg’s suggestion, make a $100 contribution to the Redondo Beach “Serious Crime Reduction Fund.”  The clients agreed to this resolution.
Our clients were very happy with this resolution, as each wanted to avoid a misdemeanor and being on probation at all.  This resolution met such goals.
For more information about furnishing alcohol to a minor and underage possession of alcohol, please click on the following articles:
Contact us.
Serving Torrance, Long Beach, Compton, Airport Courthouses and Other Courthouses.