Back in 1999, our client was arrested in a police sting operation on Crenshaw Boulevard in Lennox.  He was 23 years old.  He pled no contest to a violation of Penal Code § 647(b), a misdemeanor.

The Gist of This Summary:  Convictions are not automatically expunged from one’s criminal history after some period of time, i.e. seven years or ten years.  Our client in the following case summary suffered a conviction for solicitation of prostitution from almost 20 years ago.  We had it expunged in 2015, after our client was experiencing advancement difficulties at work due to the conviction.

He was placed on three years of summary, or informal, probation, ordered to stay away from the Crenshaw Boulevard area where he was arrested, ordered to pay $370 to the Los Angeles Superior Court and submit to an HIV / AIDS test.  He successfully completed probation and stayed out of all trouble until late 2015.
In late 2015, our client came to our office, asking if he could have the conviction expunged.  He had worked for the same Fortune 500 company since 1999.  He had risen up from the lowest ranking job to be divisional controller.  However, he had reached his ceiling with any conviction on his record.  His boss told him that if he had his conviction from 1999 expunged, the company could promote him to a higher position.
He first spoke with Greg Hill about his earlier conviction and his performance on probation.  Greg asked him about his intervening life and the client described his employment history.  He also explained that he had gotten married and was under pressure to earn more money to support his family.
Greg explained the process of petitioning for dismissal of a complaint under Penal Code § 1203.4.  He described how if the judge grants the petition that the earlier case filing would not be erased or deleted from his Livescan results, but would change the last plea to “not guilty” and show that the case was dismissed instead of convicted.  Greg explained that if the judge in the Torrance Superior Court granted the petition, the benefit was that if any employer (with certain exceptions) asked if had ever been convicted, he could legally answer “no.”
However, expungement did not erase, delete or remove the conviction from the client’s criminal history.  It did not “clean up” the record so that there was no hint of any criminal history, but it did show the case had been dismissed, which suggested perhaps it lacked merit and thus, that our client did not commit the offense.
The client then retained Greg Hill & Associates.  Our office first went to the Torrance Superior Court and obtained the docket report for the case to confirm that the client indeed was qualified to petition the court for expungement.  It turned out the client was eligible. 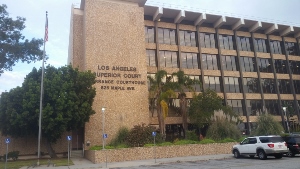 Torrance Superior Courthouse
Greg’s law clerk then contacted the client and elicited answers to certain questions about his employment history, family life and community involvement.  The client answered the questions and our law clerk then prepared a declaration for the client to sign.  The law clerk then also prepared a short memorandum of points and authorities, explaining to the judge why the judge could dismiss this particular case and change the plea from “no contest” to “not guilty.”
The client then signed his declaration.  Greg Hill then reviewed the short memorandum of points and authorities, signing the pleading as well.  Our office also filled out the State of California judicial counsel form CR-180 for the petition and the order for dismissal.
Our office then filed the petition for dismissal, complete with the short memorandum or points and authorities and the client’s declaration.  Our office also paid the $120 fee to the Los Angeles Superior Court.
About three weeks later, our office received the signed order from the judge in Torrance Superior Court.  Our office quickly pdf’d the document and e-mailed it to the happy client, now ready to apply for promotion at work to levels he otherwise was barred.

For more information about the issues in this summary about expungement, please click on the following articles:
Contact us.
Serving Torrance, Long Beach, Compton, Airport Courthouses and Other Courthouses.