Torrance, Furnishing Alcohol to a Minor, ABC Arrest, No File

Our client, age 34 with no prior history, was working a second job at a well-known liquor store (whose name will remain anonymous for this summary).  His primary day job was as a food-service worker at a local school.
A younger-looking female came into the store and selected a six pack of Coors Light.  She appeared to know what she was doing and went straight to the cooler, selected the beer and went straight to the cash register area.
Our client scanned the bar code on the beer and told her what the cost would be with tax.  The young lady quickly produced a ten-dollar bill and handed it to our client.
Before our client could even deposit the money into the cash register, two plain-clothes men stepped forward and told our client to please stop.  They showed our client their wallet-badges identifying themselves as officers from the State of California Department of Alcoholic Beverage Control.  They asked our client, knowing the answer, if he had verified the purchaser was age 21 or older.
Our client replied that she certainly appeared to be over 21 by her looks and manner of buying the beer.  He was aware of the problem in general and knew what factors were important in deciding for himself if a buyer should be asked for proof of being 21 or older. 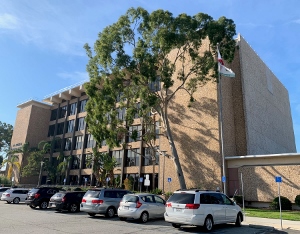 Torrance Courthouse
The officers quickly responded that the decoy was nineteen years old and that our client should have requested to look at her driver’s license before allowing her to buy alcohol.
They officers then prepared a ticket for our client’s violation of Business & Professions Code § 25658(a), furnishing alcohol to a minor, and had him sign a promise to appear in the Torrance Courthouse about two months later.
The officers then left our client and the store.  Our client was shocked and felt the full effect of possibly losing his job at the liquor store and his job at the school district, even though in his current capacity he had direct contact with the students.
He then took to the Internet to educate himself a bit on what he faced, whether the case was solid and what he needed to do.
He called up Greg Hill & Associates and spoke with Greg Hill.  Greg listened to the client explain what had happened and his serious concerns about his employment future.  Greg recommended first and foremost that our client immediately enroll in and take the next available LEAD (Licensee Education on Alcohol and Drugs) class, which are free and offered about once per month in Long Beach.  Greg explained that getting the certificate of completion may help him avoid the case being filed, and if it is filed, help Greg negotiate for some form of diversion to prevent a conviction, as Greg had success doing so in Torrance Superior Court in prior cases.
Greg also requested that the client provide him a resume and proof of employment with the school district, as he wanted to provide this to the Torrance City Prosecutor and the Torrance District Attorney’s office to argue for an office hearing for our client.
The client enrolled in the very next LEAD class, which was two weeks away, and attended it.  About three days after the class, he received the certificate of completion and brought that to Greg Hill, who then mailed this off to the Torrance City Prosecutor and the Torrance District Attorney’s office.  Greg mailed it to both prosecuting agencies because, while the incident took place within the City of Torrance (and thus the Torrance City Prosecutor would be expected to handle this), he also thought the District Attorney’s office might receive the ABC report instead.
In the meantime, our client was asked to resign his position from the liquor store.
After mailing out the certificate of completion from the LEAD class, our client’s resume and his proof of employment with the school district, with a short cover letter requesting that the matter be handled through an office hearing, Greg received no response.
Greg then appeared at the Torrance Superior Court for the arraignment, nervous that the client would be charged with a misdemeanor offense that could derail his career with the school.  The client stayed at work with the school.
Greg was happy to find that no case had been filed at all and the District Attorney’s office had decided not to file.  The client was extremely happy with this and thankful he had Greg recommended the LEAD class and assembled a pre-filing letter to the prosecuting agencies.
For more information about issues, please click on the following articles:
Contact us.