Torrance, Expungement so DUI Client Can Volunteer at VA

Our client, who was 100% disabled as a result of his service to our country in the U.S. Army, suffered his second DUI in Torrance in 2016.  His BAC was 0.19%.  He was 47 years old at the time.
He did not hire Greg Hill & Associates to handle his DUI, instead opting for the public defender’s office.  It merits mention that now, after August, 2018, this client’s DUI might have been eligible for military diversion under Penal Code § 1001.80.

Brief Synopsis:  Motion for early termination of probation granted in Torrance Superior Court.  Then a petition for dismissal (expungement) was also granted for client, who needed his DUI conviction expunged so he could volunteer at the Veteran’s Administration in Tennessee.

The client himself was a veteran and 100% disabled.
However, he then returned home to Tennessee after finishing the eighteen-month SB38 program and paying a court fine of $500, plus penalties and assessments (close to $2,400).  Once home, he began getting treatment for his service-related injuries at the Johnson City, Tennessee Veteran’s Administration (VA).  He enjoyed the classes quite a bit and inquired how he could volunteer to teach some other classes there and at the Ronald McDonald House nearby.
Our client had a master’s degree in marriage and family counseling and thought he could use this education and his life experiences be of help to others.  He was otherwise receiving a monthly check from the government due his service-related disability, but wanted to help others.
When he asked if he could teach some classes at each location, they both told him no because he was on probation.
The client then contacted Greg Hill & Associates and asked if we could help end his probation early.  He was already past the half-way point in his probation, so Greg told him we could certainly ask the judge, but cautioned that in Torrance on second-time DUI’s, some judges wanted to see the client complete the full term of probation, especially when there is a high BAC as there was in the client’s case.  Greg pointed out, however, that due to the client’s age and his reason being to help other veterans as a volunteer, his request may be looked upon with more sympathy.
Greg’s office then prepared the motion for modification of probation, under Penal Code § 1203.3(a), so as to end it.  The motion included a brief discussion of the underlying conviction and then a much more thorough discussion of why the client wanted to end probation early.  The motion explained how the client had successfully completed all terms of probation except the passage of three years, but that he had completed more than half of the three years.
The motion then included a declaration from the client, explaining his frustration at wanting to teach other veterans at the VA and help children at the Ronald McDonald House, both in Johnson City, Tennessee, but being told he could not if he was on probation.  The motion included a photocopy of the client’s master’s degree. 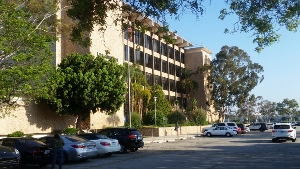 Torrance Superior Courthouse
The judge in Torrance hearing the motion for early termination of probation had no difficulty in granting the motion.  She said it was the right thing to do.
The client was overjoyed at this, as he was quite depressed he could not help others.
Greg Hill & Associates then immediately filed a petition to dismiss the complaint under Penal Code § 1203.4, also known as expungement.  The reader of this summary should understand that “expungement” in California does not erase, delete or remove the conviction, but it does change the “no contest” plea back to “not guilty” and it does result in an order of dismissal of the case.  More importantly, it allows the defendant, our client, to answer “no” insofar as this conviction to any employment application question whether the client has had a conviction, with certain exceptions.  In our client’s case, he needed to have his first DUI conviction expunged as well so that he could answer “no” to the question above.
For more information about early termination of probation and expungement in general, please click on the following articles:
Contact us.
Serving Torrance, Long Beach, Compton, Airport Courthouses and Other Courthouses.