Torrance, Denial of Order for Ex-Wife Versus Our Client

The timing of the letter was no coincidence.  If the court found our client had complied with the terms of his summary probation, which included no further acts of domestic violence, the court would dismiss the criminal case filed against him almost two years earlier.  The letter from the ex-wife was meant to deny our client such relief.

What to Take Away:  Client defeats restraining order request in Torrance Superior Court of ex-wife by producing earlier declarations from the wife to question the ex-wife’s credibility, which the judge considers and denies her request.

Our client came to us aptly saying, “Hell hath no fury like a woman scorned” as our client had asked for the divorce although his wife actually filed to have the marriage annulled.

Greg Hill looked through the ex-wife’s petition for a domestic violence restraining order and immediately noticed that the ex-wife made allegations which could be objectively shown to be lies.  Greg  produced signed declarations from the ex-wife in the underlying domestic violence case that contradicted her allegations in her request for a restraining order.  He also noticed that the ex-wife made no allegation that she feared our client in the future, an important issue required for the court to restrain anyone’s future contact or conduct.

Greg Hill then submitted a supplemental brief to the court, asking the judge to note that if the ex-wife was truly in fear for her life, her attendance at work would not be more important.  Greg pointed out multiple other statements made by the ex-wife that suggested the court should view the ex-wife’s credibility with skepticism. 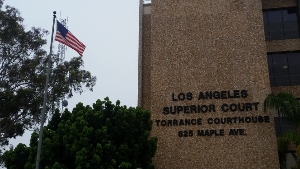 Torrance Superior Courthouse
At the hearing (second) on the restraining order, the Torrance Superior Court judge focused his questions on the ex-wife.  By the tenor of his questions, it was evident that he questioned the ex-wife’s honesty.  Sure to form, the ex-wife told more lies under oath to cover up her prior statements and the judge sensed that the true purpose behind her request for a restraining order was a vendetta to punish our client.

The judge denied the ex-wife’s request for a restraining order and our client was extremely relieved.  He now hopes his ex-wife will leave him alone, especially after the judge exposed her lies in open court.

Our client feared that had  the court enabled the wife by granting the restraining order, the scheming ex-wife would promptly call the police to claim he was violating the order.  She would not stop until he was behind bars for her ending the marriage.  Our client would then be accused of a misdemeanor and be back in court.  The ruling by the court made this possible mischief impossible.