Our clients, an older couple with two young children, lived in a condominium complex alongside an early-20’s couple with a bulldog and an infant.  The older couple owned their condo; the younger couple was renting the unit from the owner.

The young couple refused to clean up after their dog when it defecated in the common areas of the condominium complex, including in the gym and in the elevators.  They also allowed their dog to swim in the pool and Jacuzzi, which they admitted was their way of giving him a bath.  They thought this was cute and funny.

When our clients suggested they change their habits, the young couple told our clients to sell their unit and move if they didn’t like it.  They also keyed our clients’ cars, spit on them in the elevator and yelled loudly at our clients, calling them bigots and fascists.   Our clients were Caucasian and the younger couple were Caucasian, too.

Other neighbors also complained about the young couple’s behavior and claimed to have received similar bizarre reactions as well.  Finally, the young couple's outrageous conduct was brought to the attention of the homeowners association.

Before the monthly meeting, the young neighbors were given notice to appear at the upcoming homeowners association meeting.  In response, the young couple decided to use the restraining order process as an offensive weapon to prevent our clients from attending the meeting.  It is common in restraining order cases to request for the parties to stay at least 100 feet away from the other party.

When our clients were served with the petition for a restraining order, the young neighbors commented, “Good luck!”  This was an attempt to use exclude witnesses from the meeting.  It was also using the restraining order process for an ulterior purpose.

Our clients then came to our office three days before the hearing on the restraining order, desperate and confused.  Our office immediately gathered signed declarations from seven other neighbors who experienced similar threatening conduct by the young couple. They also refuted the false claims made in the petition of the restraining order.  Luckily, one of the seven neighbors had photographs of the bulldog in the Jacuzzi, the pool and the gym.

Our office also prepared declarations from our clients, which they signed, to the same effect. 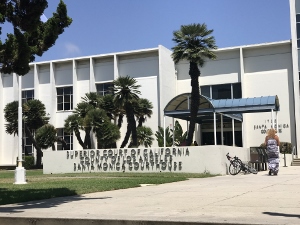 Santa Monica Superior Courthouse
Before the hearing, our office filed the brief in opposition to the restraining order. At the hearing, several of the neighbors attended to testify for our clients’ peaceful character and to the content of their declarations.

The young neighbors seeking the restraining order brought no witnesses.   They showed up to court in shorts and wearing sandals, as well as t-shirts.  They confidently announced they were representing themselves.

The judge read our brief and each declaration.  The judge questioned the young neighbors with extensive questions.  The young dog owners became increasingly nervous when the judge cross-examined them based on the declarations submitted on our clients’ behalf.  Succumbing to their anxiety, the young dog owner couple then admitted under oath that some of their claims in their petition were not true.

The judge had little patience for such audacity, abruptly ruling in our clients’ favor and denying the petition for the restraining order.  Our clients felt vindicated and satisfied that justice had been served.