Our client was at a party in Santa Ana with several of his good friends. As our client and his friends were leaving the party, they heard yells from a female, apparently being beaten up by her boyfriend. The client and his friends responded to the location to help the female. At approximately the same time, the Orange Police Department arrived, only to turn on our client instead of the suspect in the beating of the woman.

Summary:  Santa Ana police instruct our client to drive away from a location and then arrest him for DUI, claiming he was speeding at 50 miles per hour even though he only drove approximately 50 yards before being stopped. Case resolved for DUI after motion to suppress denied.

Our client and his friends told the police that they were not the suspect, but the police did not like the client’s attitude. One of the cops was Caucasian and handcuffed our client. Our client was outraged and said to his friend, “See, this is exactly why I hate all white people.” The quote made it into the police report.

After our client drove perhaps fifty yards, he came to a stop at a stop sign and turned left. He then drove about fifty more yards and the police pulled him over. Our client and his passenger were distinctly aware that they were being followed by the police and believed it was not a question of whether they would be pulled over, but how soon.

The police officer who pulled over our client was the same one who mistakenly handcuffed our client earlier. He told our client that he was speeding at 50 miles per hour. Our client and his passenger yelled back “Bullshit!”

The client was then pulled from the car and arrested immediately on suspicion of DUI. His car was searched and one 5 mg. Clonazepam tablet was found in the center console. Our client explained he had a prescription for the medication. Our client was then asked to perform a preliminary alcohol screening (PAS) test at the scene, but he refused, which is legal.

He was taken to the police station, where he opted for a blood test. The blood was measured at 0.21% blood alcohol content (BAC). 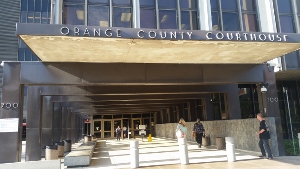 Central Justice Center, Santa Ana Courthouse
Our client was charged in the Orange County Superior Court, Santa Ana branch, with violating Vehicle Code §§ 21352(a) and 23152(b), as well as Health and Safety Code § 11375(b). At first, he decided to represent himself, confident that he could argue that the traffic stop was illegal and that his prescription for the Clonazepam would merit dismissal of the 11375(b) charge.

The prosecutor assigned to the case refused to even listen to our client and told him he faced six months in county jail on the DUI, plus a nine-month alcohol awareness program and a $500 fine, plus penalties and assessments, as well as being required to attend the Mothers Against Drunk Driving (MADD) Victim Impact Panel (VIP). The client then opted for the services of a public defender, but the public defender would not listen to him much either.

The client then retained Greg Hill & Associates. Greg discussed the case with the client and had the client diagram the area of the fight he responded to, as well as where he drove.

Greg then substituted in on the case and filed a Motion to Suppress Evidence under Penal Code § 1538.5, arguing that the traffic stop was illegal because it was physically impossible for any car, even an Indy race car, to reach fifty miles per hour from a dead stop, then decelerate to a stop at a stop sign without skidding. It was equally impossible to do so again before the client was stopped.

The motion to suppress included detailed distances and the required acceleration rates to allow a perceived speed of fifty miles per hour. The motion showed how this was impossible given the Google Earth map attached to the motion showing the distances involved. At the hearing on the motion, the police officer changed his testimony to say he saw the car speeding and did not actually pace it as his report claimed. The police officer said he estimated the speed only, visually, based on his “experience and training.”

The judge hearing the motion denied the motion, saying he found the officer was telling the truth. Greg argued that the officer may have honestly believed he perceived speeding, but his perceptions were inaccurate and impossible. The judge responded by saying, “well, you can always appeal.”

Disgusted at the judge’s reluctance to acknowledge the objective facts, Greg then turned to pleading the case for the best plea bargain possible. Greg was able to finally have the Health and Safety Code § 11375 charge dismissed after showing the prosecutor the prescription, but the prosecutor required our client to still provide a DNA sample. This was silly and nothing more than a prosecutor abusing his power. The same prosecutor, to his credit, did allow our client no jail and to attend just the six month DUI course and dismissed the high BAC charge (Vehicle Code § 23158) once Greg showed the prosecutor how there was no chain of custody for the blood sample. The client’s fine was also reduced from $500 plus penalties and assessment (about $2,450) to $390 plus penalties and assessments (about $2,000).

This was a tough-fought case over ten months and many court appearances. It epitomized the uphill battle faced by DUI defendants in Orange County.

For more information about DUI, click on the following articles: