Our client, age 49, was headed to Mammoth for a long weekend with her boyfriend.  The two planned on partying, skiing and spending time with friends they had arranged to meet there.

Before they had even driven more than an hour out of Los Angeles, they began making mixed drinks with vodka and cranberry juice.  The two also began smoking marijuana.

Summary in 50 Words or Less:  Client arrested for DUI along I-395 on way to Mammoth.  Case resolved in Ridgecrest Superior Court.  Client complies with not even a single term of plea bargain, so bench warrant is issued.  She learns of the bench warrant and calls Greg Hill.  Greg gets bench warrant recalled, probation reinstated and eventually, after client fulfills all terms, probation terminated early, then the conviction expunged.

After the two left Mohave and made their way through Red Rock Canyon, the boyfriend began arguing with our client.  It was about 9:00 p.m.  Our client was taken aback and did not know what to do.  She demanded he drop her off on I-395.  She did not want to spend the next three hours with him in the same car, let along the entire weekend.

He pulled over and stopped near to Highway 178 intersection (one way goes to Lake Isabella, the other direction leads to NAS China Lake and the city of Ridgecrest).  As she was unloading her luggage, he tried to prevent her from doing such a rash thing.  Passing motorists observed the commotion and called 911, who sent the CHP out to the location.  They arrived within minutes.

As the client and her boyfriend continued struggling with her luggage, they saw the flashing CHP lights approaching.  The boyfriend jumped into the car’s passenger seat and pretended to be asleep.

The CHP smelled the alcohol on our client’s breath and arrested her for DUI.  Her blood alcohol content was measured at 0.22%.  She was taken to the Ridgecrest jail, where she spent the night.  Her boyfriend bailed her out a few hours later after he sobered up himself.

The client then hired a local Ridgecrest attorney to handle her DUI.  He negotiated a plea wherein she was placed on sixty months of summary probation, during which time she was obligated to serve ten days in county jail (allowed to serve this in Los Angeles County), pay a fine of $390 plus penalties and assessments (total of $1,861) and attend the AB541 alcohol awareness program.  While the short program was certainly a good deal, the ten days of county jail was not so good.

Our client was informed of this deal, but did nothing to comply.  Two years later, she learned that the Ridgecrest Superior Court judge had issued a bench warrant for her arrest.  She then called up Greg Hill & Associates.

She spoke with Greg Hill, explaining the terms of her plea bargain and why she did not comply.  Greg then went out to the Ridgecrest Superior Court and appeared in person to have the bench warrant recalled, which the judge allowed.  Greg then obtained updated commitment orders for our client and requested that the county jail be permitted in private jail.  The judge agreed. 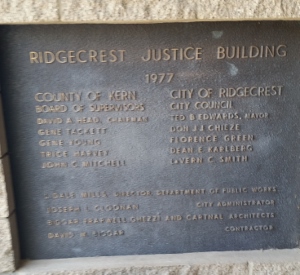 Ridgecrest Superior Courthouse
The judge, upon seeing the client had done everything, then reinstated the client on probation, which was a different approach than a judge might proceed with in Los Angeles County.

At the thirty month mark in the probation period, which was actually more than five years after the DUI arrest, Greg Hill & Associates then filed a motion for the judge to terminate probation early.  The grounds were that our client was trying to obtain her real estate broker’s license and could not do so while being on probation.

Greg then appeared for the hearing on the motion to terminate probation early.  The court clerk warned Greg that she thought the judge would deny the motion, as it was a DUI.

However, Greg argued that the client had stayed out of trouble for more than the probationary period already, lest the delay caused by her not serving the jail term, paying the court fees or doing the DUI classes.  The judge commented that he thought the argument was quite clever and agreed to end probation early.

The client was extremely happy with this, as she needed the higher income that a real estate broker license would make possible.  Greg Hill & Associates then successfully petitioned the court under Penal Code § 1203.4 for dismissal (expungement).

For more information about early termination of probation and expungement, please click on the following articles:
Contact us.