Our client, age 18, was a senior in high school.  She had a boyfriend, age 23, who introduced her to using a magnetic device to defeat the many efforts certain stores use to catch shoplifters.
She and her boyfriend walked into the Macy’s at the South Bay Galleria in Redondo Beach holding an empty Forever 21 shopping bag.  This may have caught the eye of the loss prevention, as they noted this in their report.
The two selected a Tommy Hilfiger shirt for him, a black Polo shirt for him, a grey Nike shirt for our client, two blue Tommy polo shirts, a Free People jacket and a sleepwear shirt for our client and then our client entered a fitting room with the items.  Loss prevention noted that our client exited the fitting room with no items in hand, but a bulging Forever 21 shopping bag.
Loss prevention used the “Count and Color Method” to note exactly what was missing and grew suspicious of our client. 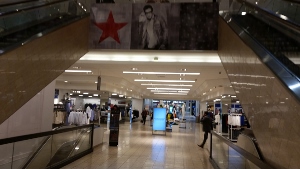 Macy's Store
The client and her boyfriend then went to the upstairs area via an escalator and tried to leave Macy’s, walking past the cash registers without paying for anything.  No more than ten steps outside the store, loss prevention stopped our client, holding the bag.
They took her back to an office within the store.  Our client’s boyfriend continued walking away.
Once in the loss prevention office, the contents of the bag were inventoried and a magnetic sensor remover was found.  Our client explained that she used the magnetic remover to take off the EAS sensors, which she left behind in the fitting room.  The items totaled $361 in value.  The Torrance Police Department then came to the scene and transported our client to the Torrance Police Department.
The client was then released on her own recognizance, ironically to her boyfriend who had been with her in the store.  The two then called Greg Hill & Associates and met with Greg Hill the following day.
Greg listened to the client explain what had taken place and how she was quite concerned about a conviction for a crime of dishonesty because she hoped to one day become a nurse.  Indeed, she had already taken certain classes at El Camino College, despite not yet graduating from North Torrance High School.
Greg explained that he expected that the Redondo Beach City Prosecutor most likely would not allow an amendment of the complain to allege trespassing or disturbing the peace due to the large value of items stolen and the use of a magnetic device.  However, Greg thought judicial diversion would be more likely, but it would also be a stretch.
Greg recommended that the client take two online shoplifting prevention courses and provided the client with the links to Tom Wilson Counseling, Logan Service and the National Association of Shoplifting prevention.  He also requested the client’s class schedule from El Camino showing the client’s ambitious class schedule there despite still being in high school.
Greg then appeared at the arraignment for the client and requested that the Redondo Beach City Prosecutor amend the complain to allege a charge of trespassing (Penal Code § 602(m)), to which the client could enter a plea, and the shoplifting charge (Penal Code § 484(a)) could be dismissed to help the client preserve her dreams of becoming a nurse.
The Redondo Beach City Prosecutor declined to amend the complaint, saying that our client was a sophisticated client who had most likely succeeded at using the magnetic device many times in the past, but was finally caught and now she needed to be punished, rather than given a second chance.
Greg then asked the judge to allow judicial diversion, so that our client could earn a dismissal and avoid a conviction, although she would have to initially plea “no contest” to a violation of 484(a).
The judge struggled mightily with the request, saying she wanted the client in court to ask her certain questions.  So the matter was put over a few weeks and the client came to court.  The Redondo Beach City Prosecutor argued strongly against judicial diversion, but the judge did grant judicial diversion, saying she was impressed with the two online classes the client took and her academic ambitions.
However, the judge required, as conditions of diversion, that the client take a further online shoplifting prevention class, perform 80 hours of community service, pay the Redondo Beach booking fee, pay a $150 court fee and stay away from her boyfriend and all Macy’s for a year.  The client was relieved to have the second chance to keep her record clean of any conviction.

For more information about judicial diversion and diversion in general, please click on the following articles:
Contact us.
Serving Torrance, Long Beach, Compton, Airport Courthouses and Other Courthouses.