Our client, age 45, was shopping at Macy’s to not only return a few items she had previously purchased, but to also exchange such items for other items that fit her better.  She was rushed for time, so she only had perhaps 20 minutes to quickly select replacement clothes, try them on to verify they fit properly and then stand in line to complete the exchange.

As luck would have it, she spent too much time trying on various clothes to exchange and by the time she got in line to make the exchange, she did not have enough time to wait for the line of customers until her turn at the register.

In a Nutshell:  Client walks out of South Bay Galleria Macy’s wearing $197 in clothes on from the store, with price tags hanging off and in full view of loss prevention officers.  This was her second-time shoplifting.  Her first shoplifting case, three years earlier, had been reduced to disturbing the peace (Penal Code § 415(2)).  This second case resolved in Torrance Superior Court with no jail.

She was rushed because she needed to pick up her son at Chinese school a few miles away and in the past, if she was not there on time, her son would simply try to walk home.  Because it was after sunset, she needed to be to the school on time.  After all, the Chinese school was in a rougher area of town and she did not want her young son venturing out onto the sidewalks, crossing streets, etc.

Our client was very well educated, with a master’s degree in engineering from a national top 10 university and employed with a household name defense contractor, but she was not so smart on time management.  While standing in line waiting to exchange the items, she anxiously tried to call the Chinese school to tell her son to simply wait, but the school was not answering.  Her son did not have a cell phone (the client was concerned he would just use it to instead play games and not study).

At the store, when the point in time came when she had to leave to go pick up her son, she made the decision to just leave the store, wearing the replacement clothes as well, complete with price tags conspicuously hanging off.

Loss prevention officers at Macy’s had been watching her earlier, according to them because she acted suspiciously.  Once our client left the store, without exchanging the items at all (not leaving behind the earlier purchased items), she frantically ran to her car.  Loss prevention officers ran after her and stopped her right as she was about to open her car door.  She was wearing $197 in clothing that had not been paid for or exchanged for with other clothing. 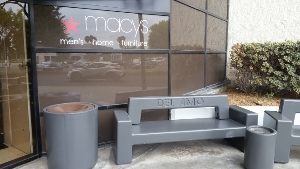 Macy’s loss prevention then took her back to their office, where she allegedly told them, “I think I have a problem with stealing.”  The truth is that her Chinese accent is so thick that she is very difficult to understand and she was crying hysterically.

Our office had represented her in a prior shop lifting incident three years earlier out of another courthouse nearby, wherein Greg had been lucky enough to have the case reduced from an alleged violation of Penal Code § 484(a) (“Petty Theft – Shoplifting”) to Penal Code § 415(2) (“Disturbing the Peace”).  The § 415(2) conviction involved just two years of summary probation and a $50 fine.  As the client was married to a U.S citizen, immigration issues were not relevant.

The client came to Greg Hill & Associates and asked if we could “do it again” for her.  Greg had to explain that such luck would be unlikely a second time.  Moreover, her case would be prosecuted by the Redondo Beach City Prosecutor’s Office, which can be very tough.

Greg advised the client to immediately enroll in and complete an online shoplifting prevention course and to give Greg the proof of completion prior to her arraignment.

Greg further told the client that he expected the second-time offense to involve jail time of 30 to 90 days, especially because the items taken were not low in value and only three years had passed since the prior incident.  However, Greg asked the client to bring him copies of her phone bill to show she was actively calling the Chinese school, her prior Macy’s receipt substantiating her reason for her being in the store to exchange items and her resume to show she was otherwise a high achiever.

Greg then went to the arraignment in the Torrance Superior Court and was met with an offer of 90 days in county jail, a $300 fine plus penalties and assessment (about $1,400 total), a stay away order from Macy’s and three years of summary probation.

Greg then explained the factual background for the events to the Redondo Beach City Prosecutor, who respectfully and patiently listened.  The prosecutor was quite skeptical of the explanation, but agreed to strike the jail requirement if the client would enter a plea at the next hearing.

The prosecutor added, “your client has a real problem indeed.  This is kind of a ninth life being given to her,” alluding to the “a cat has nine lives” in their uncanny ability to avoid serious injury over and over due to their quick reflexes.

Greg then explained the offer to the client, who reluctantly agreed, knowing that the jail term would become a cornerstone of the offer moving forward if she rejected the offer.

For more information about shoplifting, please click on the following articles:
Contact us.
Serving Torrance, Long Beach, Compton, Airport Courthouses and Other Courthouses.