Our client, age 17, liked to drive fast.  He and his friend enjoyed driving around the deserted industrial areas of Rancho Dominguez late at night.  It was safe, or so they thought, as the streets were wide and there was no residential or business traffic.  They both had small cars that they had customized with fancy hubcaps and wheels, like in the movie “Fast and Furious.”

One night, they were driving laps around a particular block when someone noticed them.  That person called the police, who responded to the area and found our client.  The police officer hid himself beneath the shadow created by a large tree that was near a street light.

In a Nutshell: Client, age 17, ticketed for exhibition of speed (Vehicle Code § 23109) after officer, hiding in the shadows, sees our client and his friend racing on streets late at night in industrial area of Rancho Dominguez.  Case dismissed at Van Nuys Juvenile Traffic Court.

As our client leading his friend into a turn, the officer immediately took chase.  From his vantage point, due to large buildings in the area obstructing his view, he could not have seen our client for more than a second or two before he turned on his overhead flashing lights and set out after our client. 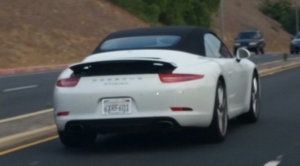 Typical "Fast" Car
However, the Compton Police Officer issued our client a ticket for violating § 23109, “Exhibition of Speed,” which is a misdemeanor.

The client assumed this offense could be resolved by simply paying a fine.  His parents did, too, until they looked on the Internet and read that it was a misdemeanor and that their son likely would be placed on summary, or informal, probation for two or three years.  They knew with his upcoming college applications that their son could not be on any form of probation to enroll in the school he already was accepted to, to begin the following fall.

The parents were also concerned that the DMV might suspend their son’s driver’s license, which would make his driving to and from college extremely difficult.

The parents thus called Greg Hill & Associates and spoke to Greg Hill.  Greg listened to the parents describe the facts of the case and Greg realized that the likely charge for exhibition of speed really did not fit, or at least, luckily for their son, was defensible.

Greg explained how a violation of Vehicle Code § 23109 requires proof that a driver accelerated from a stop sign or stop signal (red light) in such a way as to exhibit the speed of his car to others.  Here, the officer never saw our client come to a stop or even slow down enough to rapidly accelerate to “show off” to another person.  Our client’s friend was a half-mile behind him, after all.  Moreover, the industrial area was totally deserted.  There was no one cheering him on from the sidelines like in the movie, “Fast and Furious.”

Greg then spoke to the client, who confirmed his parents’ version of events.  While Greg told the client that he believed the charge and the ticket was a mistake according to the code section cited, he explained that judges often do not follow the strict meaning of a statute.  Therefore, if the judge suspected our client was exhibiting his speed earlier in the evening or simply a half-mile earlier, as our client may have, he would convict the client on that basis, rather than on the officer’s testimony.

Greg therefore recommended that the client enroll in and take an online safe driving course.  The client then did so immediately.

Greg and the client, along with his parents then appeared in the Van Nuys Juvenile Traffic Court (where all juvenile traffic matters are heard in Los Angeles County) and demanded a trial.

Approximately two months later, they returned to the court.  The citing officer was subpoenaed by the court to appear at the trial.

Greg and the client were ready to prove to the judge that the police officer lacked sufficient observation to issue the citation for a violation of section 23109.  Greg and the client rehearsed a series of questions and answers to undercut whatever the officer claimed, assuming he testified truthfully.

On the day of trial, perhaps because the officer knew his ticket was erroneously issued, the officer did not show up to court, although he was subpoenaed.  The judge then dismissed the case, much to the satisfaction of the client and his parents.

For more information about juvenile cases in general, please click on the following articles:
Contact us.
Serving Torrance, Long Beach, Compton, Airport Courthouses and Other Courthouses.