Home
Other Information
Criminal Defense Articles
May a Judge Exclude My Family from the Courtroom in Trial?

May a Judge Exclude My Family from the Courtroom in Trial?

In a Nutshell: A judge may exclude defendant’s family from the courtroom in very narrow circumstances and only if certain requirements are met according to established law.

In 2016, Judge John T. Doyle issued an order prohibiting the family members of Defendant Mark Malik Scott from the courtroom.  Was this legal?

The answer is best answered by looking at the law at issue and the facts leading to the order.  As the reader may well know, the United States Constitution (and the California Constitution) guarantee a criminal defendant the right to a public trial.  See U.S. Const., 6th and 14th amendments; Cal. Const., art. I, § 15.  The right is premised on a fear of convictions reached in secret, wherein the laws can be ignored and attorneys and judges perform in a less-than-conscientious manner.  Gannett Co. v. DePasquale (1979) 443 U.S. 368, 383.

However, the “presumption of openness” in the courtroom “may be overcome only by an overriding interest based on findings that closure is essential to preserve higher values and is narrowly tailored to serve that interest.”  People v. Baldwin (2006) 142 Cal.App.4th 1416, 1421, quoting Waller v. Georgia (1984) 467 U.S. 39, 45 [holding that instances when closure of the courtroom “will be rare . . . and the balance of interests must be struck with special care”]. 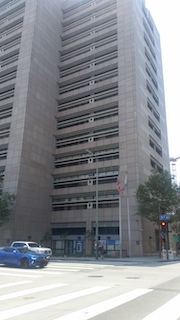 1)    The existence of an overriding interest that is likely to be prejudiced absent the closure;

2)    The closure is narrowly tailored, i.e. no broader than necessary to protect that interest;

3)    No reasonable alternatives to closing the proceeding are available; and

4)    The trial court must “make findings adequate to support the closure.

The protection of witnesses from threats, harassment or physical harm is an overriding interest and deserving of protection that may allow closure of the courtroom.  See NBC Subsidiary (KNBC-TV), Inc. v. Superior Court (1999) 20 Cal.4th 1178, 1223, fn. 48.

Here, in the case of Mark Malik Scott, Scott was charged with six counts with second degree robbery, one each victim.  Within three days, in South Central Los Angeles, he approached six people and robbed them, some by using a gun.  All victims were juveniles, except one.  The information alleged both gang (East Coast Crips) and weapons enhancements.

On the first day of trial, during jury selection, no one was excluded from the courtroom.  At the outset of trial, the judge admonished everyone in the courtroom, including members of Scott’s family who were present, not to have any contact with the prospective jurors.

That very same day, one juror was riding the elevator down with Scott’s father, who asked her if she had been excused.  The juror described the contact as an attempt to “manipulate her by the family.”  In response, Judge Doyle excused the juror and admonished the father that contempt proceedings would be pending against him.

The next morning, one of the juvenile victims told the judge that although she wanted to testify, she did not want to take the stand to do so.  She explained that her mother had received “a couple” threats over the phone “that if she testifies, that will cause problems.”  These threats made the juvenile and her family “very concerned about retaliation,” although they did not know if Scott’s family made such threats.

The jury convicted Scott of all charges and Judge Doyle sentenced him to twenty years and eight months in state prison.  The jury deadlocked on the gang allegations.

On appeal to the Second Appellate District, Scott raised many issues, but this article will just address the argument that Judge Doyle violated his constitutional right to a public trial.

The Second Appellate District Court agreed (People v. Mark Malik Scott (2017 DJDAR 3259).  It found, first and foremost, that there was not substantial evidence that any member of Scott’s family was in any way involved with the purported threats.  The decision, instead, was just based on suspicion that it was Scott’s family.  Moreover, the earlier contact by Scott’s father with a prospective juror was found to be “not intimidating or threatening.”

Based on this finding just on the first requirement to exclude family members, the Second Appellate Court felt no need to consider the remaining three requirements and the judgement was reversed as to the convictions relating to the witnesses during which the family was ordered excluded.  The verdict was otherwise affirmed, but remanded back to the Compton Superior Court for resentencing.
The citation for the Second Appellate District Court ruling discussed above is People v. Mark Malik Scott (2d App. Dist., 2017) 10 Cal.App.5th 524.
For more information about courtroom procedures, please click on the following articles:
Contact us.