It was about 10:45 p.m. Our client had taken clients out to dinner and drinks in Downtown Los Angeles and was returning home to San Pedro. Our client, age 45, had politely matched his clients drink for drink, which meant three IPA beers, during dinner. It was a good meeting.

As our client was returning home along the southbound I-110 Freeway in the number two lane, he noticed a police officer with flashing lights behind him. Our client had just passed Carson Boulevard. The client saw the officer’s rapid closing speed and believed he was proceeding past him to an emergency, perhaps a car accident, further south on the Harbor Freeway. 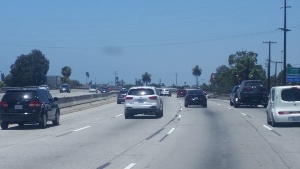 Southbound I-110, Harbor Freeway
Our client, believing he was acting out of courtesy, put on his right turn signal and changed lanes to the right. The police officer did the same thing. Our client then became concerned the officer intended to pull over our client. Our client then continued changing lanes to the right, but could not make the off ramp for Sepulveda Boulevard. He therefore kept going, in the right-most lane, with his blinker on.

To show he acknowledged the officer’s interest in him, our client tried pulling over to the shoulder, but the police officer used his public address system to instruct our client to continue to the next off ramp. This next exit was Pacific Coast Highway. To indicate to the officer that he did not intend on fleeing, our client drove with his right tires along the painted “fog line” that separates the travelled lanes from the shoulder.

Finally, our client pulled off the freeway and into the gas station immediately to the right of the off ramp. The CHP officer told our client that he had seen our client swerving within his lane and then riding along the fog line, straddling it for about a half mile. Our client responded that he straddled the fog line as a signal to the officer that he intended to pull over. In other words, he did so intentionally, not due to impairment.

The officer believed our client was lying and proceeded to rudely interrogate our client. Our client had no prior criminal history. He advised the officer that he could not do the field sobriety tests due to recent knee surgeries on each knee, but the officer insisted upon having our client do such exercises. Quite predictably, our client failed such tests and was arrested.

The officer asked our client if he would submit to a breath test in the parking lot and our client said he would not, which is legal, adding, “what for, you already arrested me.”

This seemed to anger the police officer, who then took our client to the CHP station on Figueroa, just north of Torrance Boulevard. Once at the station, our client opted for a blood test, rather than a breath sample. This angered the CHP officers even more.

The client was eventually released the next morning, not knowing what his blood alcohol content was at all, as the blood sample is tested at a separate CHP lab in Downey.

The client reached out to Greg Hill and met with Greg on the next day, a Saturday afternoon. The client explained the two reasons the officer told him were why he made the traffic stop. Greg explained that under People v. Perez (1985) 175 Cal.App.3d Supp. 8, 10; 221 Cal.Rptr. 776, 778, for swerving with a lane, the swerving must be “pronounced” and CHP officers rarely described the magnitude of the swerving, the number of swerves or the distance over which the officer observed this. Greg then discussed U.S. v. Colin (2002) 9th Cir. 314 F.3d 439 444-445, a case involving driving a car along a fog line, wherein the Ninth Circuit found a traffic stop was improper even when a driver drove along the I-15 fog line for over a quarter mile. The client said he felt better, knowing at least that there were legal thresholds for what the officer claimed were traffic violations.

The case was filed in the Long Beach Superior Court and handled by the Los Angeles City Attorney’s Office. At the arraignment, Greg reviewed the police report and saw that the CHP officer had failed to describe the driving so satisfy either Perez or Colin mentioned above. Greg met with the prosecutor assigned to the case, explaining that the two reasons for the stop were not factually supported. The prosecutor was unaware of the legal standards related to such alleged driving and requested copies of the two cases.

Greg also saw that the client’s BAC from his blood was 0.19%, Greg then provided her with such cases, printed out in full. Greg further explained that he believed a Motion to Suppress Evidence under Penal Code § 1538.5 would be granted, unless of course the CHP officer testifies to other facts not described in his report (which would allow the traffic stop to become proper). The prosecutor agreed that this does happen and therefore offered to compromise the claim. Instead of the mandatory nine-month DUI program, known as the AB-1353 program, the prosecutor offered our client the three month program, called AB-541, due to the Perez and Colin cases as they applied to this case.

Our client agreed to the offer made by the prosecutor, happy that he eliminated six months from his DUI program based on Greg knowing the legal standards for weaving within a lane and driving on a fog line, and then negotiating aggressively.

For more information about the issues in this DUI case, please click on the following articles: