Lomita, Vandalism of Car Tire, Client Has Prior History

Our client, age 34, was walking home from work.  He lived in an apartment complex with very limited parking, so he often had to park blocks away and walk to his home.  He regularly parked in an abandoned shopping center nearby and walked back and forth.

In a Nutshell:  Client charged with misdemeanor vandalism.  Due to the client’s criminal history and being on probation at the time of the alleged vandalism, the offer was quite onerous.  Greg Hill files a Motion for Civil Compromise, which the judge denies (we think mistakenly), but then the plea bargain improves dramatically.

One day, upon returning home from work, he was looking for a parking spot close to his apartment, but could not find one.  He then parked in the empty shopping center parking lot and walked home.  It was dusk and he had worked overtime, so he was eager to get home, eat some dinner and fall asleep.  So he walked quickly.

She called the police and the police ran a check of anyone on probation in the apartment building where our client lived.  Our client was indeed on probation for a commercial burglary case, so police were able to identify him.  They showed the victim our client’s photograph and she identified our client as the suspect.

The client called Greg Hill and Associates and spoke with Greg Hill immediately.  Greg listened to the facts of the case and explained how if the victim would accept payment for the cost of repairing the valve stem and sign a declaration stating she was no longer interested in criminal prosecution of our client, our client would be eligible to ask the judge to simply find there had been a civil compromise under Penal Code §§ 1377 and 1378 and dismiss the complaint.

Greg Hill then contacted the victim and explained that his client wanted to pay the victim for her expenses in replacing the valve stem, but that in return, our office would ask that she sign a declaration that would allow our client to seek dismissal of the case.  Greg explained that the victim certainly could refuse to sign the declaration, but the victim insisted she would do so.  She then was paid $150 for the value of the valve stem (as stated in the police report), although it most likely was significantly less.

Greg Hill & Associates then prepared, filed and served the Motion for Civil Compromise.  At the hearing on the motion, the Torrance judge hearing the motion listened to the prosecutor argue that a civil compromise should not be declared because of the client’s extensive prior record.  The prosecutor argued that such a motion was intended for someone with no prior record who had a lapse of judgement.  In our client’s case, this was an intentional, spiteful act, she argued. 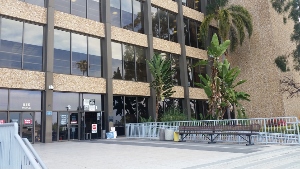 Torrance Superior Courthouse Entrance
The Torrance judge agreed with the prosecutor, noting that our client had five prior convictions over the last sixteen years.  Moreover, our client had not even been on probation for three months before allegedly committing this act of vandalism.

Prior to the filing of the motion, the plea bargain offered to our client was thirty-six months of summary probation, contingent upon his paying court fees of $300 plus penalties and assessments (total of about $1,450) and performing 80 hours of Cal-Trans.

After the ruling on the motion, the plea bargain improved to thirty-six months of summary probation, no court fees or fine and just five days so Cal-Trans.  In other words, although the motion was denied, the prosecutor realized how her previous offer to resolve the case was too heavy.  She also realized that had our client wanted to go to trial, the one prosecution witness needed would be resentful of being brought to court.  She had to make an offer our client could not refuse to avoid this risk to herself.

The client accepted the reduced offer, happy that he had retained Greg Hill & Associates.