Kern Valley State Prison is a male-only, maximum level (Level IV) security prison.  It is overcrowded and dangerous.  In March of 2013, ten inmates there were stabbed in a mass riot there.  There are roughly 4,200 inmates there, but the design capacity is just over 2,400 inmates.  Delano is a small town, made famous during the days of Cesar Chavez as the location of his farm-worker strikes.  It is about two hours north of Los Angeles, just off the I-5 on the way to Fresno. 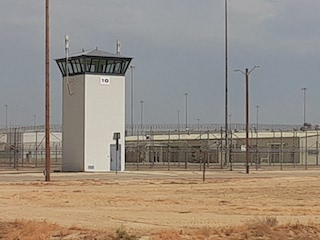