Home
Other Information
Criminal Defense Articles
Is a Waiver of Extradition Enforceable in California?

Is a Waiver of Extradition Enforceable in California?

In other states, when it is feared that someone may leave the jurisdiction, or whenever bail, probation or parole is granted, the person at issue may be required to waive extradition from any other state (i.e. California) before being allowed out of custody.  It that person then travels to California, will a California judge respect what another state imposed?
Is such a waiver claimed in your loved one’s case?  This may come as a shocking surprise.  Is it valid in California?  If not, why not?

Why This Article Matters:  A waiver of extradition entered into in another state may be enforced by a California judge if the waiver meets certain conditions.  Interestingly, the waiver must be less than five years old, so California seems to “reward” someone who is subject to such a waiver, violates probation or parole, travels to California and is able to avoid being apprehended for five years or more.

California Penal Code § 1555.2 sets forth the requirements for California to honor such a waiver and then order extradition of the person taken into custody in California.
The requirements are that the person was required to waive extradition in advance as a condition of bail, parole or probation.  Second, the offense for which the person was in custody must be punishable by imprisonment for more than a year (this will be according to the law of the demanding state); and the alleged violation of the person’s conditional release must have occurred within the last five years, meaning such a waiver is not indefinitely effective.
A prosecutor in California, after discussing the person in custody with the prosecutor from outside California (the demanding state), may apply to a California court for an order that a person may be returned to the demanding state under Penal Code § 1555.2 at any time after the fugitive’s arrest.  The application may be made at any time after the fugitive’s arrest. 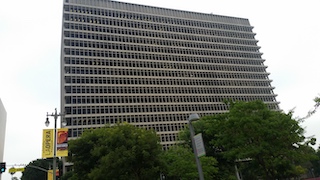 Clara Shortridge Foltz CCB
A hearing must then be held at which the prosecuting attorney presents a certified copy of the demanding state’s order conditionally releasing the fugitive, along with the condition that the person then was required to waive extradition, as well as a certified copy of the order directing the fugitive’s return because he violated the terms of his release.
The judge hearing the matter must accept the certified copies of the documents described above as conclusive proof of their contents and presume the validity of the extradition waiver condition.  In other words, it is up to a good defense attorney to rebut this presumption by arguing that the extradition waiver is invalid for violating § 1555.2.  If the judge then finds that the identity of the person in custody in California matches the person described in the documents, the judge will order the person remain in custody and direct that he or she be delivered to agents of the demanding state (Penal Code § 1555.2(b)-(c)).
No bail may be granted unless the prosecutor agrees to this, with the demanding state’s concurrence that bail be allowed and set.  Penal Code § 1555.2(d).
If defense counsel wishes to challenge to judge’s order, he or she must file a writ of habeas corpus and ask the judge to stay the order of delivery to allow defense counsel to file the habeas petition.  Again, unless the prosecutor here in California and the prosecutor in the demanding state agree, no bail is allowed for the fugitive during the pendency of the habeas petition.  Penal Code § 1555.2(e).  Sometimes, a formal, written habeas petition is not required and the arguments can simply be made on the record, orally.
If the fugitive decides to waive extradition, the defense attorney and the prosecutor should set a status hearing exactly 30 days forward to ensure that the fugitive was indeed picked up by the demanding state.  If the fugitive was not picked up, defense counsel can argue for the release of the fugitive on his own recognizance (no bail). Penal Code § 1555.1; 18 U.S.C. § 3182; People v. Superior Court (Lopez) (1982) 130 Cal.App.3d 776, 786, 182 Cal.Rptr. 132.
There is perhaps nothing more surprising and legally confusing than extradition for someone whose loved one is in custody.  Most criminal defense attorneys are unfamiliar with the law in this area, so it is wise to retain an attorney who has experience and knowledge in the procedures to ensure extradition is proper, if ordered.