Our client was a nursing assistant with a young child.  She was 30 years old.  She did not want to become a registered nurse one day, but her more immediate concern was simply maintaining employment.

She went into Kohl’s on Sepulveda Boulevard, north of LAX, and proceeded to take approximately $309 in clothing with her into a “fitting stall.”  It was about 4:15 p.m. on a Saturday, so the store was full of other shoppers.  The clothing was several t-shirts for her young son, as well as a tank top, a pair of pants for him, a pair of shoes for him and a pair of shoes for herself.

Summary in 40 Words or Less:  Client, age 30, shoplifts $309 in clothing for her young son and herself from Kohl’s in Westchester.  Case is filed in the Airport Courthouse and resolved with a dismissal after client completes tasks required by judge in judicial diversion.

When she emerged from the “fitting stall,” everything was neatly folded and placed in her purse, while carrying an empty Nike shoe box.  Inside the fitting stall on the floor were numerous price tags she had cut off using scissors and an empty Nike shoe box for the children’s shoes (for her son).  Loss prevention had been watching her on closed circuit television as she had walked throughout the store earlier in the afternoon.

Loss prevention noticed her going into the fitting stall with an armful of items and emerging with just a shoe box, but a bulging purse.  They instantly suspected she had placed all the items in her purse and decided to investigate her.

As they approached our client, our client went to the check out line and paid for some of the items.  She did not pay for the remaining items in her purse that she did not pull out.

Loss prevention stopped her as she walked out the store’s north entrance toward the parking lot, making a citizen’s arrest.  They then asked her to accompany them to the loss prevention office while they called the Los Angeles Police Department to respond to the scene.

While waiting for the police to arrive, loss prevention asked our client to show them what she had in her purse.  In it, they found the above-described clothing items, which they inventoried.  Our client was reduced to tears, fearful of losing custody of her son to the father.

The LAPD then arrived and transported our client to the Pacific Division station, where she was booked and released with a signed promise to appear in the Airport courthouse in about six weeks. 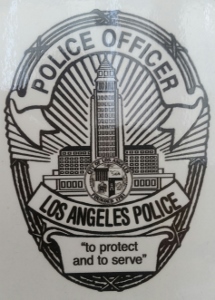 The client was unsure if she would lose her job just based on the arrest and was assured that she would not.  However, if she were convicted of theft (shoplifting is theft), she would be asked to resign her position.

Greg explained how, with no prior record, the client would be eligible for judicial diversion.  Greg was familiar with how the case would be assigned within the judges in the Airport Courthouse and explained that the judge who would handle the case was unlikely to reject a request for judicial diversion.  Greg warned the client that while he was nice, he was tough and the likely terms of diversion would be many hours of community service.

Greg further explained that the Los Angeles City Attorney’s office would be assigned to prosecute the case based on the location of the arrest and the crime being a misdemeanor.

Greg did explain that he was a bit concerned about the fact that the client had literally brought scissors into the store to use to clip off the price tags, but believed this would not be seen as evidence of having an intent to steal before entering the store (which would make the crime commercial burglary).

Greg then appeared for the client in the Airport Courthouse for the arraignment.  Luckily, the client was charged with just shoplifting (Penal Code § 459.5).  Greg then requested judicial diversion.  The judge (actually a commissioner) granted the request, but assigned our client 150 hours of community service, an exceedingly high amount as compared to what other judges normally order for judicial diversion.

The client was more than happy to have the chance to “earn a dismissal” and performed the 150 hours in less than three months.  She was quite determined to keep her job by avoiding a conviction for a crime of theft.

Approximately one year after entering the plea, Greg appeared again in the Airport Courthouse with proof of the client having performed all of the community service.  Greg then asked to withdraw the client’s “no contest” plea to shoplifting and the prosecutor then made a motion to dismiss the case under Penal Code § 1385 (“in the interests of justice.”).

The client was very happy with the handling of the case, as she kept her job throughout and did not lose custody of her son.