Our client, age 26, had had a rough day.  She went down to the Bungalow in Huntington Beach to relax and have some dinner, a new place in the Pacific City shopping center area.  She had friends in the area that she might see at the Bungalow and that may relieve her anxiety from her bad day.
At some point after midnight, the Huntington Beach Police Department was dispatched to the Bungalow on a call about a very intoxicated female.  The police arrived and were met by a private security guard for the Bungalow that explained he had responded to a complaint of a very intoxicated female pulling up plants from outdoor planter boxes in the patio area of the Bungalow and yelling at people who told her to stop.
The security guard then located our client, but she ran away to the top level of the Bungalow.  The security guard gave chase, which lasted several minutes when he finally grabbed her and tried to escort her out.
After he had her under control, he reported that our client would alternatively pretend to pass out and fall to the ground, which would make him lose control of her because she just turned to dead weight and then would lay on the floor.  She would then awake and resume walking out of even try to run away again, but each time the security guard would catch her again.  This cycle apparently happened three or four times.
During one of the passing out acts, as she “woke up,” she bit the arm of the security guard on his forearm.  The guard showed the Huntington Beach Police the bite marks on his forearm.
The Huntington Beach Police Department then put handcuffs on our client and placed her a police car for transportation to the Huntington Beach Police Department.  According to the police report, our client was argumentative with the police, even saying, “What’s the problem with drinking?  I had a bad day.  My boyfriend dumped me.  I lost my job.  I didn’t even get to do cocaine today.” 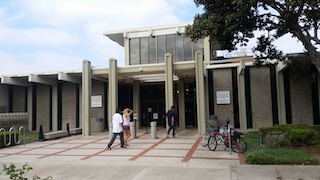 Westminster Courthouse
After being released from the police station when her parents posted bail for her for public intoxication (Penal Code § 647(b)) and battery (Penal Code § 242), the client called up Greg Hill & Associates.  It merits mention that because the security officer was not a government employee police officer, our client biting the security officer was not battery on a police officer.  When released from the Huntington Beach jail, she signed a promise to appear in the Westminster Courthouse in about two months.
She spoke with Greg Hill and explained what had happened.  She also explained that she had a prior possession of methamphetamine cases from a few years earlier that was dismissed after she completed a diversion program.  Then a little over a year earlier, she was prosecuted for public intoxication in Orange County and given diversion again.
Greg remarked that it was quite fortunate that she was afforded diversion on the public intoxication case and that usually, diversion is only given once to anyone.
Greg explained how he believed the pending case would be resolved, which was going to be rough because of her quite recent case for the exact same thing about a year earlier.  Moreover, biting a security guard and running away from him was possibly trespassing.  A prosecutor could charge her with at least public intoxication, vandalism, battery and trespassing.
Greg believed that the prosecutor would not require jail, but our client would be placed on two or three years of informal (summary) probation with an obligation to attend 52 or more Alcoholics Anonymous (AA) meetings and perhaps perform a small amount of community service, i.e. 40 or 80 hours.
Greg suggested that the client attend at least ten AA meetings prior to the arraignment and provide Greg with a resume to take to the arraignment.
The client dutifully attended ten AA meetings and provided Greg with her AA sign-in sheet to show her attendance at such meetings.  She also sent Greg her resume.
Greg then appeared on the client’s behalf at the arraignment at the Westminster Superior Court.  To his surprise, the client was only charged with public intoxication.
Adding to this lucky feeling, the prosecutor and Greg discussed the case and Greg showed the prosecutor the client’s proof of attendance at ten AA meetings.  Greg also showed the prosecutor our client’s resume.
The prosecutor offered to resolve the case for diversion on terms that included dismissal in three months if our client complete a six-hour anger management class, provide a DNA sample and stay out of trouble for the three months.
Our client was extremely happy with this resolution.
For more information about battery and diversion, please click on the following articles:
Contact us.
Serving Torrance, Long Beach, Compton, Airport Courthouses and Other Courthouses.