Our client, age 26 and an insurance underwriter for a major U.S. healthcare company, was at a party with friends at a beach house near 17th Street.  Alcohol was served at the party and everyone was having a good time.

As the party wound down, our client headed home.  As he was walking to his parked car, he realized he needed to urinate.  It was about 1:00 a.m.  He noticed a house under construction, with a chain link fence surrounding the lot and a small gap between the fence and the adjoining property.  There was enough space, our client saw, for him to step into the area and urinate without being seen.

This is what he believed as he did so.  He finished urinating and began walking on towards his car when out of nowhere, a Hermosa Beach Police Officer approached him and told him he had seen him urinating.  He then issued him a ticket for violating Penal Code § 372, “Public Nuisance.” 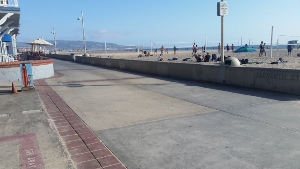 Hermosa Beach Strand
The client was absolutely convinced he would lose his job if convicted, so he called Greg Hill & Associates about twelve hours later.  He was very keen on describing to Greg how the officer could never have seen him urinating.  The client wanted to take the matter to a jury trial, confident that the officer would admit he issued the ticket without even seeing our client urinating at all.  Greg reminded the client how police officers are well-known to fabricate events on the stand and, moreover, there was a safer, less risky way to avoiding a conviction.

Greg described to the client how on January 1, 2015, a new pilot program for diversion for low level offenders would be effective.  Greg knew the client would be eligible because he had no prior criminal history, but reminded the client that the judge did have discretion to deny diversion if she thought judicial diversion would be inappropriate.

After the arraignment, Greg filed a motion for imposition of judicial diversion under Penal Code §§ 1001.94 to 1001.98, the statutory provisions implementing AB 2124.  The Redondo Beach City Prosecutor handling the Hermosa Beach cases filed an opposition to the motion, complete with pictures of all the public restrooms available in the Pier Plaza area and statistics about all the tickets for public nuisance that the City of Hermosa Beach issues each year.

The judge handling the case took the matter very seriously, well aware that if she granted diversion on this case, she would be expected to do likewise on all the 160 or so such cases per month coming out of Hermosa Beach.

When the judge asked Greg if he had anything to add to the court’s analysis, he pointed out that the prosecution’s opposition was somewhat meaningless since it solely focused on the public restroom issue in the Pier Plaza area, whereas this case was from a ticket issued five blocks away.

The judge acknowledged this problem with the opposition’s arguments, granting the motion because she found once the opposition was seen for this sole point, there really was no opposition otherwise.  As a condition of diversion, the judge ordered our client to pay $600 to the City of Hermosa Beach and stay out of trouble for a year.  If the client did this, the case would be dismissed.  The City of Hermosa Beach would then be responsible for using the money as it saw fit to improve the lighting and signage of existing public restrooms and maybe build additional restrooms away from the beach area.

For more information about some of the issues in this case, click on the following articles:
Watch our video about sex offenses by clicking here.