Our client, age 27, was a college graduate and employed in the marketing field.  She attended a Sunday morning brunch in Hermosa Beach with some people from work at one of the Pier Plaza restaurants.  She had a little too much to drink, as the restaurant was serving free mimosas.

When she emerged from the restaurant, her head was spinning from all the alcohol.  She went down to the beach and lay down in the sand.  The weather was cloudy and not too hot.  She fell asleep.  When she woke up, it was mid-afternoon and she panicked, knowing her boyfriend would be worried where she was.  She was also feeling nauseous from all the alcohol.

Distilled Down:  Free mimosas at brunch in Hermosa Beach led our client to allegedly be seen climbing into a trash dumpster, which led to her arrest for public intoxication.  Judicial diversion (no longer available now) was granted for our client, leading to dismissal of the case after she attended 40 AA meetings and performed 40 hours of community service.

She forgot where she had parked her car, so she went to the ground-level outside parking lot.  She could not find her car at all and began to panic.  Suddenly, the urge to vomit overcame her and she walked over to a fenced in area with a large trash bin.
At that point, according to the client, she blacked out.  However, a police officer patrolling the area spotted our client allegedly attempting to climb into the trash dumpster.  The officer then approached our client, who then sat down on the ground, which was very dirty in the area of the dumpster within the fenced in enclosure. 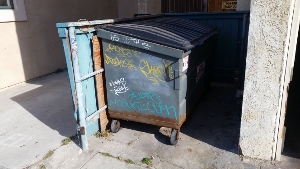 The police called the client’s boyfriend, who came to the police station to pick up our client.

About two weeks later, the client’s father contacted Greg Hill & Associates.  Greg spoke with the father about the case, eventually later speaking with the client about the facts.  As the client had no prior record and the charge of public intoxication was eligible for judicial diversion under AB 2124 (codified at Penal Code §§ 1001.94 to 1001.98), Greg explained that he hoped to ask the judge for imposition of judicial diversion.  This would allow the client to “earn a dismissal” of the case and avoid a conviction.

Greg encouraged the client to attend as many Alcoholics Anonymous (AA) meetings as she could between the call and the arraignment, so he could show the judge that the client was worthy of being offered judicial diversion.

The client took Greg’s advice and attended 20 AA meetings prior to the arraignment.  She gave Greg documentary proof of this and Greg took it to court in the Torrance Superior Court, where the arraignment was held.

The Redondo Beach City Prosecutor handling the case and Greg discussed the facts of the case and how to resolve it.  The Redondo Beach City Prosecutor offered a plea bargain wherein our client would plead no contest to a violation of Penal Code § 647(f), and then be sentenced (and thereby suffer a conviction) to two years of summary probation with a requirement that she pay a fine of $300, plus penalties and assessments (total of about $1,400) to the Los Angeles Superior Court and have to perform 80 hours of community service.  Greg politely rejected the offer.

The client then attended 20 more AA meetings and completed her five days of community service.  The case was then dismissed.  The client was very happy with this resolution.

For more information about public intoxication and the issues in this case, please click on the following articles:
Contact us.