Our client and his ex-wife had four children together, so once they divorced, custody issues and visitation rights became a source of continuing contact between the former couple.  As our client worked and his ex-wife did not, relying instead on his child support payments (she had custody of the children), the ex-wife remained dependent upon her ex-husband.

Our client was outraged, as he was being blackmailed plain and simple.  Moreover, his ex-wife was sleeping with the married father of one of the children’s friends and receiving money from that man.  The ex-wife also frequently “dumped” the kids on our client on Fridays when she wanted to get away for the weekend to party.  Our client resented such irresponsible conduct, as did his children.

Our client showed Greg Hill & Associates his ex-wife’s request for a restraining order.  It was pathetic – lies, lies and more gratuitous lies.  We went to work preparing a lengthy brief in opposition to the restraining order requested.  We gathered declarations from two of the children who had knowledge of the falsity of the allegations to refute what their mother claimed.  We then explained why, legally, under California Family Code § 6300, et seq., the ex-wife’s allegations were insufficient for the court to issue a restraining order.

It turned out, our client told us, that a worker from Child Welfare Services had helped the ex-wife fabricate the claims of violence so the ex-wife would have an easier time staying in the United States.  As it was, however, her ability to stay in the U.S. legally was expiring soon and she wanted a judicial finding of abuse against her to stay.  It was sad to see such scheming. 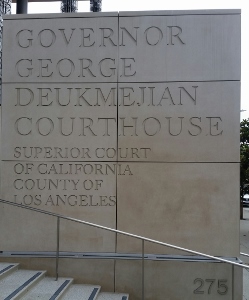 Once the case was called, the judge asked the ex-wife if she needed more time to prepare for the hearing and perhaps hire an attorney.  The ex-wife then, amazingly, stated to the judge, “I just want this all to go away.  I will dismiss the request if he pays me $1,500 so I can pay some of my expenses.”  Greg Hill quickly pointed out to the judge how the forum of the court was being used to extract money from our client and that the request should therefore be denied immediately.  The judge did not disagree, but reiterated her question to the ex-wife.  The ex-wife agreed to continue the hearing.

Less than one week later, after having time to consider what she said, her ex-husband’s brief as well as her ex-husband’s answer, the ex-wife realized perhaps that she would lose and dismissed her request for a restraining order.

Our client was very happy that we had dissuaded his ex-wife from such legal blackmail.