Our client, age 24, received a first-time DUI conviction after being stopped for speeding along the westbound 10 Freeway at, allegedly, over 100 miles per hour after leaving Las Vegas several hours earlier.

As the reader of this summary may recognize, our client’s speed while DUI on a freeway, being more than 30 miles over the speed limit on a highway (20 miles per hour on a city street), would expose him to a mandatory minimum 60 days in county jail above any other sentence imposed pursuant to Vehicle Code § 23582.

In a Nutshell:  Expungement in Fontana Superior Court for our client, who suffered a DUI conviction when stopped for speeding while driving home from Las Vegas.  The client had a 0.21% BAC.  He was an RN (registered nurse).  After his informal, or summary, probation ended, our office filed a petition for dismissal (expungement), which was also granted.

After this arrest, the client called Greg Hill & Associates and asked what he could do.  He described the facts of the case, which included a BAC of 0.21%, and how he was with his gay lover, arguing so he did not realize how fast he was going.

Greg listened to the client explain the facts and then explained what would most likely be alleged by the Fontana District Attorney’s office, as well as the sixty-day minimum enhancement described above.  Greg further explained that the client could be charged also with an infraction for driving over 100 miles per hour on a freeway (Vehicle Code § 22348(b)(1)).  Greg warned the client that with his relatively high BAC, he might face more than sixty days in county jail.

The police had asked where our client was coming from and our client had candidly answered Las Vegas, to which the officer exclaimed, “wow, your BAC must have been close to 0.30% when you left Vegas.  You are lucky you made it this far with no accidents.”  Greg explained that he expected the district attorney to note this as well and perhaps, fit the plea bargain to such extraordinary facts. 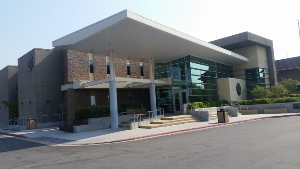 Fontana Superior Courthouse
Greg then appeared in the Fontana courthouse and, over four court hearings, negotiated a plea bargain where the sixty-day jail term was reduced to zero and the client was placed on three years of summary probation, conditioned upon his enrollment in and completion of the nine month AB1353 DUI program, attendance at 50 Alcoholics Anonymous (AA) meetings (extra punishment for the high BAC and high speed), payment of $1,862 in court fees and fines and an obligation to obey all laws.

At the half-way mark in the client’s probation, Greg Hill & Associates contacted the client and inquired if he was interested in asking the judge to terminate probation early and then if this motion was granted, to then seek expungement of the conviction.

However, the client did not respond to our office’s inquiries, but after the client’s probation terminated, he contacted us, asking about expungement.

He explained that he had completed his nursing degree and needed to take the NCLE exam, as he had the goal of one day becoming an RN.  He had been working as a caregiver in a Santa Monica facility, but the pay was quite low and this made it tough for him to pay all his bills.

Greg explained to the client that in his quest to become a state-licensed registered nurse, he would still need to disclose his DUI conviction despite the eventual expungement of the conviction.  The client was disappointed to learn of this, but appreciated that an expunged conviction still would look better than a conviction which the defendant did nothing about.

Greg worked with the client to prepare the Petition for Dismissal of the Complaint, complete with a declaration from him explaining his need for expungement.

The petition was then filed with the Fontana Court and served upon the Fontana District Attorney’s office.  Two months later, the judge assigned to the client’s case approved the expungement of the conviction.

For more information about early termination of probation and expungement, please click on the following articles:
Contact us.
Serving Torrance, Long Beach, Compton, Airport Courthouses and Other Courthouses.