It was just past 2:00 a.m. on a Sunday morning. A Gardena Police Officer pulled behind a car driving through a residential neighborhood. The car had three occupants.

As our client, age 28, brought her car to a stop at a stop sign, she could see that the car behind her was a police car. She became nervous because she knew that she had consumed a few drinks earlier in the evening and she knew the officer was watching her every move.

In a Nutshell:  Client pulled over in Gardena after her left tire touches the center line for about two second on a residential street. She has a 0.12% BAC. Case filed in Torrance and resolved as a wet reckless.

Her backseat passenger was a large Samoan man (400 pounds) who heard our client announce that she saw a cop car behind her. He was sitting directly behind our client. In response, he leaned over to his right, across the center of the car, to avoid blocking our client’s view of the cop through her rear-view mirror. He could not lean over too far, however, because there was an infant car seat in the rear-right passenger seat.

The police officer observed the rear right passenger lean over to his right as our client followed a bend in the road to the left. As she went around the bend, her left rear tire tracked along, but not over, the double yellow center line. The tire did not even cross over the center of the two yellow lines, as our office later confirmed by viewing the police officer’s dash cam (also called an MVARS, which stands for Mobile Video Audio Recording System). Her left tire touched the center double yellow line for about two seconds.

Our client then came to a stop at a red light. The instant the light turned green, the police officer illuminated his overhead flashing lights. Our client instantly pulled over. 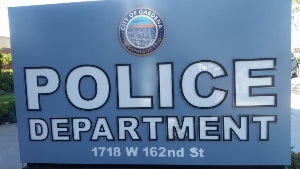 The police officer told our client that the reason for his stop was because he believed the rear seat passenger was not wearing a seat belt. This seemed ridiculous because the officer had no way of seeing if the rear-seat passenger had a lap belt.

Once he made contact with our client, however, he claimed to detect the odor of an alcoholic beverage and had her exit the car. He then administered a Preliminary Alcohol Screening (PAS) test upon her and her breath was measured at a blood alcohol content (BAC) of 0.12%. The officer never bothered to ask the rear seat passenger if he had a lap belt secured. He never even had him exit the vehicle.

However, he arrested our client and took her to the Gardena Police Station, where she submitted to a further breath test, registering a BAC of 0.11%.

Upon being released from the police station, the client called Greg Hill & Associates. The client described to Greg what the officer told her as the basis for the stop, which seemed like a very pretextual stop, given that the officer never even tried to verify that the rear seat passenger was not wearing a seat belt.

Greg explained that if the police report stated just this reason for the traffic stop and did not describe the officer observing any type of impaired driving, it was possible to ask the judge to exclude the evidence of our client’s BAC.

The reason, Greg explained, was that in a recent U.S. Supreme Court case, Rodriguez v. U.S. Supreme Court (No. 13-9972, April 21, 2015, 2015 DJDAR 4311), Justice Ginsburg stated that a routine traffic stop is more like a brief stop to stop and frisk under Terry v. Ohio (1968) 392 U.S. 1, rather than an arrest. Its tolerable duration is determined by the seizure’s “mission,” which is to address the traffic violation that warranted the stop. “Authority for the stop ends when tasks tied to the traffic infraction – or reasonably should have been – completed.” A gratuitous further search (as was sought here of our Client) was improper, in other words.

The District Attorney disagreed, explaining that once the officer observed our client’s allegedly flushed face and bloodshot eyes and smelled the odor of alcohol, he had articulable facts to investigate her intoxication.

Greg responded that the officer, however, never even looked at the seatbelt and in fact, could not see the seatbelt anyways from a car behind, so the stop was entirely for DUI. Moreover, the MVARS video of the client showed she actually did not “lane straddle” at all. Instead, her tire never even crossed more than half way over the center double yellow lines.

The District Attorney then proposed a compromise on a reckless driving charge. Greg explained this to the client, adding that in his experience, police officers often say things in trial that add to the police report in ways that preserve the arrest and the charges. This was a risk that trial would include. Without trial, the reckless driving charge would mean she would avoid having to install the ignition interlock device.

Our client agreed to the wet reckless charge, which meant that she would be on summary probation for 36 months, have to pay a court fee of $390 plus penalties and assessments (about $1,800), complete a three month alcohol awareness program (AB541) and attend a Victim Impact Panel given by Mothers Against Drunk Driving (MADD).