Our client, age 23, was homeless and walking around downtown Los Angeles while high on heroin.  He had recognized a woman inside a coffee shop and believed she was someone who had abandoned him many years ago.

Why This Summary Matters:  Formal diversion offered for our homeless client, then high on heroin, who smashed a giant window in a coffee shop.  Client agreed to plea to trespassing (PC 602(m)) and misdemeanor vandalism, perform 200 hours of community service and enroll in a drug treatment program.  If he completed these things, the case would be dismissed in two years.

He recognized her as the owner of the coffee shop and decided to retaliate for the troubles she had caused him.  This was all a fabrication in his mind, induced by the heroin high he was riding.  He picked up a large piece of concrete and walked up to the ten foot by eight foot glass window.  He heaved the rock as hard as he could at the large window.  His intent was to break the window and he did.

He was surprised at how easy the window broke and ran away.  The coffee shop owner ran outside after our client, who quickly ran away.  She took several photographs of him, which she gave to the police.

Unfortunately, the police recognized our client, but had no idea how to find him.  They understood he was homeless, but they had a rough idea of where they could find him.  They headed to Skid Row and found him within two days and promptly arrested him.

Once in custody, our client called his friend in San Francisco, who contacted Greg Hill & Associates.  Greg had represented the client on prior cases, so he was aware that the client was already on probation and that bail would be discretionary on a probation violation.

Greg then immediately appeared in court (the next morning) and argued for bail, which the judge did grant.  The client faced one charge of violating Penal Code § 594(a), misdemeanor vandalism, although curiously, the estimated cost to repair the large window exceeded $500.  This was notable because the distinction between misdemeanor and felony vandalism is $400 for the cost to repair – less than $400 is a misdemeanor and more than $400 is a felony. 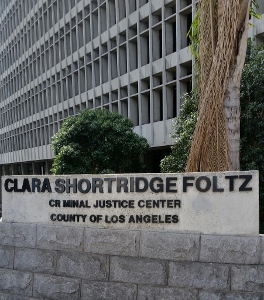 Clara Shortridge Foltz Superior Courthouse (CCB)
The client’s friend earnestly wanted the case resolved with the client being ordered to a drug rehabilitation program, which Greg certainly agreed with, but Greg had to explain that restitution and anger management classes most likely were the initial components of a plea bargain.

The first offer on the case, which was the client’s second vandalism case (among several other prior convictions), was sixty days in Los Angeles County Jail.  This offer really was difficult for the client, a heroin addict, to consider, as he was most concerned about being in jail away from his drug of choice.

Greg then discussed the case facts with the Los Angeles City Attorney handling the matter.  She was surprisingly empathetic to the client’s drug issues, which Greg introduced as mitigating the malicious intent that otherwise would be an integral part of the case.  Greg characterized the client’s drug use as interfering with his ability to clearly understand the nature and consequences of his actions, but acknowledged such use was largely intentional.

The City Attorney understood the nature of the case quite well and offered the client a deferred entry of judgment plea bargain, wherein the client would plea to trespassing (Penal Code § 602(m)) and misdemeanor vandalism, with an agreement that if the client completed the drug treatment program, 200 hours of community service and paid restitution, the case would be dismissed in two years.  It was a dramatic change from the initial offer of sixty days of county jail.

The client was very happy with the offer because it avoided jail entirely.  He gladly accepted the offer, appreciating that this offer was probably the last time he would ever resolve a criminal case without time in custody.