In what can only be best described as a narrowing of the rising blood alcohol content (BAC) defense, the Fourth Appellate District affirmed the DMV’s suspension of Ashley Jourdan Coffey’s license despite seemingly solid evidence that Coffey’s BAC was rising after being stopped and below the legal limit when last driving.

Brief Synopsis:  The “Rising BAC” defense was rejected in the following DUI case, despite very good expert testimony at the DMV hearing.  We think the following ruling exemplifies the power that a DMV Hearing Officer enjoys and thus, why it is critical to approach the DMV hearing quite seriously.

At 1:32 a.m., a CHP officer allegedly observed Ms. Coffey’s car weaving in and out of traffic in Orange County.  After Coffey pulled over, the CHP officers administered various field sobriety tests (FST's) and, according to one officer, Coffey failed them all.  A half-hour later, the CHP officer placed her under arrest.
Curiously, the CHP officer did not administer a Preliminary Alcohol Screening (PAS) test at the scene at all.  This is unusual. 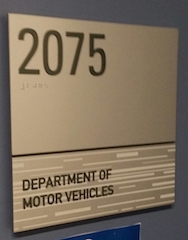 DMV Sign
An hour after Coffey last drove, the CHP then administered a breathalyzer test and Coffey’s BAC measured .08%.  Usually this means that an hour earlier, given normal metabolism of ethanol, that the BAC was .10%.  Normally, a person’s BAC decreases with time.
The CHP then administered two further breathalyzer tests of Coffey’s breath twenty-seven minutes later.  The results were not lower, but higher.  They were 0.095% and 0.096%.

At the DMV hearing, Ms. Coffey was represented by counsel, who appeared with an expert witness concerning blood alcohol levels.  The expert testified to two opinions.

First, he opined that Coffey’s blood alcohol content when she was last driving was below .08% based on the evidence that her BAC was .08% an hour after being stopped and rising after that test.  It would seem a safe estimate of her BAC when driving, given the documented pattern or rate of rise, was .05%.  This is considered reverse extrapolation.

Second, the expert opined that breathalyzer results have a margin to error of .02%, so the .08% result was more likely .06%.

We believe this second opinion should not have been given because it suggests the .08% result really also could have been .10%, which undermines the rising BAC theory.

Coffey then petitioned for a writ of mandate to set aside the suspension order.  She argued that her expert’s testimony had shown her BAC was below .08% when she was driving and that the DMV was not free to reject uncontradicted expert testimony.

The appellate court denied the petition by minute order, stating that the DMV officer was entitled to reject uncontradicted expert testimony.  Coffey then appealed to the Fourth Appellate District via a writ of supersedeas.

The Fourth Appellate District first did issue a temporary stay of Coffey’s license suspension.  It then agreed that Coffey’s expert did rebut the three-hour presumption that Respondent’s BAC was at least .08% at the time of driving.  However, the appellate court found substantial evidence still to support the DMV’s finding that Coffey’s BAC was at least .08%.  It noted that it could not substitute its own deductions regarding the record for those of the DMV.  Hildebrand v. Department of Motor Vehicles (2007) 152 Cal. App. 4th 1562, 1567-1568.  It further commented that it could only overturn the DMV’s factual findings if the evidence reviewed there is insufficient as a matter of law to sustain the findings.  Lake v. Reed (1997) 16 Cal. 4th 448, 457.

According, the Appellate Court affirmed the suspension.  We believe this case epitomizes the importance of presenting the very best defense one can at the DMV Hearing.
The citation for the Fourth Appellate District Court ruling discussed above is Ashley Jourdan Coffey v. Jean Shiomoto (4th Dist. App., 2013) 161 Cal.Rptr.3d 157 (affirmed by the California Supreme Court at Coffey v. Shiomoto (2015) 60 Cal.4th 1198, 185 Cal.Rptr.3d 538, 345 P.3d 896).
For more information about DMV hearings, click on the following articles:
Contact Greg Hill & Associates