Defenses to Evading a Police Officer Depend upon the Facts

Anyone who has been charged with evading an officer, a violation of either Vehicle Code § 2800.1 (a misdemeanor) or § 2800.2 (a felony), usually either has a sense of outrage and insistence of innocence or, on the other extreme, cannot stop admitting their guilt.  We suspect this is because on television, police chases are common and well understood.

What to Take Away:  Evading a police officer has quite a few defenses that ought to all be considered before thinking of accepting a plea bargain and this article discusses such defenses which might apply.

Misdemeanor evading a police officer is a serious crime, punishable by up to one year in county jail and a maximum $1,000 fine.  The court may also impound your car for up to thirty days and suspend or restrict your driver’s license as a term of probation.

If the prosecution can prove you drove in “willful and wanton disregard for the safety of others,” a felony evading arrest charge is likely.  If you cause injury or death to another while evading arrest, a three to ten year prison sentence is possible. 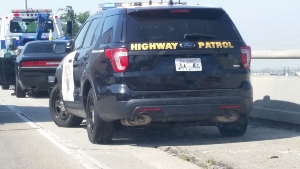 There are many defenses to this crime that are often overlooked.  A marked police car does not necessarily have to be black and white, but it must have a red lamp, a siren and logos, insignia or other characteristics that distinguish it from a civilian car.  Just having a red lamp and siren are not enough.  An amber light is also not sufficient.  So if the “police car” displayed no logos or insignia that made it look different than a normal car most people drive, this crime cannot be proven.

Second, the prosecution must prove you had the specific intent to evade the officer.  This means you specifically intended the prohibited result, i.e. to get away or lose the officer.  Often, we see evading an officer in the context of a DUI.  If our client is so drunk or high that he does not realize an officer is attempting to pull him over, he cannot have the specific intent required for this crime (even if the intoxication is voluntary), although our client will most certainly face DUI charges.

In other contexts, our client is distracted by conversation with a passenger or even talking on a cell phone and just drives along without realizing there is a police car attempting make a traffic stop.  Or the passenger may be forcing you to keep driving and not stop.  Lastly, our client may be female and scared of pulling over in a dark area at night, so she will keep driving until there is an area to stop that appears safe.

The next element of the crime that is often susceptible to defeat is whether the red light was visible and the siren was loud enough.  The siren must be at least 115 decibels, so evidence of its recent calibration and testing to this level or above should be established by the prosecution.

The last element of the crime susceptible to defenses is that the officer be wearing a distinctive uniform.  A plainclothes officer, for example, who puts on a baseball cap with the words “Police” on it and a badge may be sufficient, even though a badge is not considered clothing.  Arguably, if the officer was in plainclothes and only wore a badge, this would not be enough to satisfy the elements of this crime.

For more information about evading a police officer and resisting arrest, click on the following articles:
Contact Greg Hill & Associates