In California, the failure to paid court-ordered child support can be a crime, resulting in a conviction for violation of Penal Code § 270, child neglect, or failure to provide care and support for a child.  The crime can be charged as a felony or a misdemeanor.  It can cover failure to pay child support, but also failure to provide the necessities of life for the child, such as proper food, medical care, clothing or shelter.  The failure must be willful or without excuse, i.e. simple financial inability.
As a misdemeanor, the maximum punishment for violating section 270 is one year in county jail and a fine of up to $2,000, plus penalties and assessments.  As a felony, the maximum punishment is a sentence to state prison for a year and one day, with a similar fine of up to $2,000.
Not paying child support also can be charged as contempt of a valid civil court order.  In alleging this, one must establish beyond a reasonable doubt that the order was properly served on the party at issue, i.e. in court or otherwise so that the party to be charged truly had notice of the duty to make such payments.  The judge then must find also find beyond a reasonable doubt that the failure to pay child support was intentional.  Not having the ability to make the payment can be a defense.
Not paying child support (including equalization payments after unequal property division) can result in punishment under California Code of Civil Procedure § 1218 with a sentence of up to five days in county jail, up to 120 hours of community service (15 days) and fines up to $1,000 for a first and second violation.  Paradoxically, there is no right to a jury trial on a first or second violation, although the punishment can be county jail.
On the third and subsequent violations of a court order, the community service punishment increases to 240 hours (30 days) and the county jail term increases to ten days.  It is unclear if one has a right to a jury trial on a third and later violation, although it seems clear that no right exists on a first or second violation of a valid court order.
Failure to pay spousal support, while not a crime, can nonetheless result in a court order under California Code of Civil Procedure § 1218 with up to five days in county jail, 120 hours of community service (15 days), a fine up to $1,000, payment of the affected spouse’s attorney fees and an order for the garnishment of one’s wages and a levy on one’s bank account(s) for a first and second violation.  On a third and further violation of such an order, punishment increases to ten days of community labor (240 hours) and ten days in county jail. 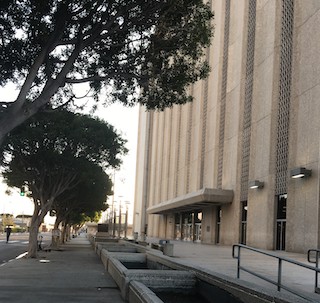 Metro Courthouse
There are numerous defenses to any claim of failure to pay child support or spousal support, but the most common defense is simply inability to make such payments based on current income and expenses.  For example, the spouse may have lost his or her job or had his hours reduced.
To prevail on such a defense, one ought to carefully document one’s income and one’s expenses, complete with paycheck stubs and cancelled checks.  One ought to also list all expenses, including for entertainment, so that inability to pay is not considered refusal or defiance of a court order.
When teenagers are involved, most commonly, there is often a defense that the child is alienated from the parent owing child support, so the child refuses to spend time with one parent.  Often, undue influence of one parent, to cause such alienation of the other parents, is alleged.

The parent owing such support then will often argue that no such child support is owed to the other parent because that parent no longer has expenses associated with custody of the alienated child.
For more information about being in court, please click on the following articles:
Contact us.