Under California Penal Code § 597, one can be charged with either felony or misdemeanor animal cruelty or neglect.  Photographs or videos of the animal(s) and their living conditions can have a powerful effect on a jury.

However, there is no standard jury instruction on what constitutes a violation of this statute, so in each trial, counsel must devise their own instruction, which can lead to confusion.  No where was this epitomized more clearly than in the case of Manuchehr Rizati.

What One Should Learn from This Article:  Penal Code § 597, animal neglect, is an ambiguous offense that the Rizati case, summarized herein, clarifies.  The defendant must commit an act or omission that recklessly causes a high degree of risk of harm to an animal the person has custody or control over.

Rizati housed more than ninety animals at his San Diego area home.  There were dogs, birds, guinea pigs, rabbits, chickens and ducks.  In 2008, the County of San Diego Department of Animal Control received many complaints from Rizati’s neighbors about the condition of the animals and consequently, made several visits to the home.

Animal Control gave Rizati multiple notices to correct conditions regarding the violations concerning the animals, including inadequate food, water, ventilation and sanitation.  He then failed to rectify the conditions, so Animal Control seized the many animals and Rizati was charged with two felony counts of animal neglect, as well as four misdemeanor counts of animal neglect.

At trial, the big issue was how to instruct the jury on whether Rizati’s conduct violated Penal Code § 597(b).  Rizati’s counsel argued for a jury instruction that said liability may be imposed on a person:

. . . who has custody of, or is responsible for providing care to, an
animal and commits an act or omission that recklessly causes a high
degree of risk of death or great bodily injury to an animal.

The prosecutor argued against such a high standard, but the trial court, perhaps in abundance of caution, agreed with Rizati, adopted his proposed jury instruction and so instructed the jury.

The jury then convicted Rizati of all six counts.  Rizati then appealed, arguing the jury instruction he requested misstated the law (and presumably fired his attorney for this).

The Fourth Appellate District, in People v. Rizati (2011 DJDAR 6818) quickly dispatched with Rizati’s appeal.  First, it cited to the doctrine of invited error, pointing out that Rizati’s appeal was based upon a standard of the law (perhaps erroneous) which he requested, so he invited the error of which he now complains.  Second, the court of appeal also simply found that the jury instruction was a correct statement of the law, so the doctrine of invited error perhaps really did not even apply. 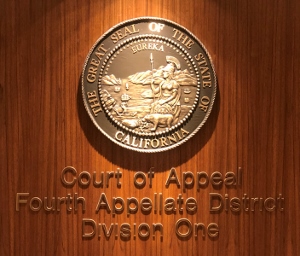 The Fourth Appellate Court of Appeals
Turning to the sufficiency of the evidence, the court of appeal found that there was sufficient evidence to convict Rizati on each count.  The court described how evidence showed the German Shepherd’s tail had no hair, indicating malnutrition and exposure to dirty conditions.  It also had scars on both ears from fly bites resulting from poor sanitation.  Another dog, a Chow Chow, had a green nasal discharge and was very underweight.  Tapeworms were also seen in the stool of the puppies at the home.

The court went on, noting that the guinea pigs were housed without a sipper bottle and no place to hide in their cages.  The rabbits had abscesses over their backs from fighting with other rabbits in overcrowded cages.  The duck was covered in feces.  Many of the birds were in cages on top of each other, allowing the birds in the upper cages to urinate and defecate onto the birds in the lower cages and into their food bowls.

In short, there was more than enough evidence to convict Rizati, so the court of appeal affirmed the conviction.

It merits mention in closing that such cases are often never tried to a jury because the animals are seized and held in some form of care pending resolution of the case.  Animal control will usually spend enormous sums in rehabilitating the animals to health and giving them shots.  The daily expense of the boarding mounts fast, especially when there are many animals.  This becomes an issue because defendant often does not want to abandon the animals, so a settlement is reached quickly out of necessity to keep the veterinary bills and boarding expenses low (in one pit bull case we had, the bill was above $20,000).  We have seen this type of pseudo-hostage situation take place over and over in these types of cases, unfortunately leading to expedient plea bargains, rather than fully negotiated plea bargains.

For more information about criminal cases related to having a pet, click on the following articles:
For case summaries of selected cases our firm has handled, click here.