Our client and his ex-wife were fighting over child custody payments.  The ex-wife was enjoying frequent trips to Las Vegas with her new boyfriend, but it was getting expensive because she was always paying.  She wanted to keep going on such excursions, but she had to find more money to pay for them.

She therefore hatched the bright idea of claiming our client was beating her up and harassing her so that she could obtain a restraining order against our client and then ask the family law court for sole custody of the couple’s four children.  This would also mean more child support payments from him to her and, sadly, more Las Vegas trips with her new boyfriend.

The mother did not have to worry about what to do with her children because her own mother would gladly welcome the children into her home.  As a grandmother, she adored and doted on the kids, leaving her daughter free to enjoy her weekends away from town.

The ex-wife had tried this ploy before and our client had offered her money to have her withdraw her request for a restraining order.  She apparently hoped this would happen again, or if it did not, she could seek sole custody of the children and have a court order for more money.  Either way, she figured, she would prevail.

The father of the four kids called Greg Hill & Associates and explained the situation.  Greg Hill then met with the client and prepared a six page brief in Opposition to the Request for a Restraining Order, complete with declarations from our client and each of her four children (ages 15, 13, 12 and 10), each stating that their mother’s allegations were false and that she only wanted the restraining order so she could use it to gain sole custody of the kids and then more support payments (i.e. more money) to fund her Las Vegas trips with her boyfriend.

Our client’s brief further asked for the ex-wife to pay attorney fees to our client, if the court found our client was the prevailing party.

On the day for the hearing, the ex-wife was served with the brief and she asked to continue the hearing, as is her right to do one time.  She told the judge that she wanted to continue the hearing to hire an attorney.  She was sweating profusely and stuttering on her words as she spoke.  This type of fight from her husband was certainly not what she expected.  She thought he would roll over once again and either write her a check or she would simply win the restraining order. 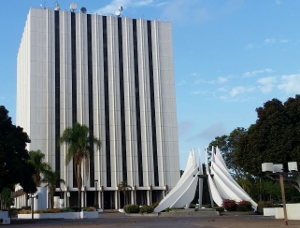 Compton Superior Courthouse
On the new date for the hearing, the ex-wife did not appear in court and the judge dismissed her petition.

Our client was quite happy to stop his ex-wife’s manipulation, at least for the time being.

This type of situation is sadly quite common in the restraining order context.  One party understands that there are consequences of winning the order, either financial or otherwise.  Sometimes, a woman scorned by a boyfriend or a husband wants to have the male put in jail so he loses his job, so the woman will secure such an order (sometimes by fabricating service of the petition by lying on a proof of service) and then stage the man’s violation of the order.

We sadly have seen this happen where the woman follows the man, until he enters a store.  The woman will then call the police to say he is stalking her in violation of the restraining order.  She will then go inside the store to be close to him.  When police arrive and arrest him, he tells the police that he did not even know she was in the store.  Usually, the police do not believe the man  and arrest him for violation of Penal Code § 166(a)(4), violation of a domestic violence restraining order, which is a misdemeanor.

Females are not the only perpetrators of this scheme.  Men will do so as well.