Home
Other Information
Criminal Defense Articles
Can One Commit Robbery If the Victim Never Put in Fear?

Can One Commit Robbery If the Victim Never Put in Fear?

Robbery is defined as “the felonious taking of the personal property of another, from his person or immediate presence, and against his will, accomplished by means of force or fear.”  People v. Williams (2013) 57 Cal. 4th 776, 781 (quoting Penal Code § 211).

In contrast, theft is the “felonious taking, carry, stealing. leading, or driving away of the personal property of another, or the appropriation of property, labor, or money by fraudulent means.”  Penal Code § 484.  In other words, robbery is a greater offense of theft.  It includes all the elements of theft, with the additional element of force or fear. People v. Whalen (2013) 56 Cal. 4th 1.69.

The Gist of this Article: One can still commit robbery if the victim was never put in fear.  When this happens, defendant must still use some show of force to commit the theft, as the following case exemplified.

What exactly qualifies as theft by force or fear is often tough to decipher. The case of People v. Robert Antonio Montalvo (2019 DJDAR 5456) posed such a challenge.  How much force is needed?  How much fear?  Is fear determined by what the robber intends or the victim experiences?  Is it an objective standard, i.e. determined by conduct that would make a reasonable person feel fear or is determined by the testimony of the particular victim?

Montalvo and his girlfriend, Alicia Ortega, orchestrated two incidents after which they were charged and convicted of first degree and second-degree robbery.

In the first incident, J.T. and his wife, I. A., checked into The Pacific Adult Motel in West Sacramento after a night of drinking.  Neither J.T. nor I.A. spoke any English.  Montalvo and Ortega apparently watched J.T. and I.A. check in and go to their room.

After the couple went inside their hotel room, Ms. Ortega went to the room and knocked on the door.  J.T. answered the door and Ms. Ortega walked in without invitation.  Ms. Ortega asked the couple if they wanted sex (the hotel included in its name “Adult Motel”).  Neither J.T. nor I.A. said they wanted sex.  Ortega then raised her blouse to display a badge.  She said she was an undercover cop and the couple was being arrested. 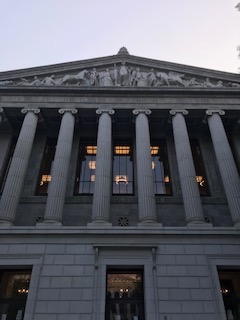 Court of Appeal Third Appellate District Sacramento
Montalvo then entered and said he was a cop, too.  He then told J.T. to stand up and and face the wall, put his hands up and spread his legs because he was going to frisk him for weapons and drugs.  Montalvo then took out J.T.’s wallet and took out $100.

Montalvo and Ortega then left the hotel room.  J.T. and I.A. reported the incident to police, who caught Montalvo and Ortega quite easily because they had stayed at the motel and the manager quickly identified them to police.  The arrest, however, was not for several months.

In the meantime, a second incident took place.  A young man, J.N., called 911 after, he claimed, he tried to buy a woman (Ms. Ortega) a sandwich.  J.N. then agreed to pay the woman for sex.  They went to an alley behind a Goodwill store in West Sacramento.

Once J.N. and Ortega were behind the store in his car to have sex, Montalvo went back there and identified himself as an undercover police officer, showing a badge.  Montalvo then had J.N. get out of his car and put his hands on his car hood and spread his legs.  Montalvo then searched J.N. and took his cell phone.  Ortega then searched J.N.’s vehicle and took $400.  Montalvo pretended to speak his “radio” while taking J.N.’s cell phone and money.  Montalvo and Ortega then left and J.N. contacted the police.

After Ortega and Montalvo were convicted of robbery for each incident, Montalvo was sentenced to 25 years in state prison and one consecutive year in county jail.  His sentence was doubled due to a prior conviction for aggravated kidnapping (one other strike conviction was removed for purposes of sentencing under Romero) and a five-year enhancement under Penal Code § 667(a)(1), as well as a one-year enhancement due to a prior prison term.

Montalvo appealed the verdict on many grounds, but this article will focus only on his argument that the evidence was insufficient to support a conviction for robbery because no force or fear was used in the thefts.  Instead, Montalvo argued, he committed false impersonation at most.

The Third Appellate District court disagreed, finding that when Montalvo had J.T. face the wall in the motel, feet spread, and arms raised, he used force to commit the theft.  In the second incident involving J.N. in the alley, the appellate court likewise found force was used when Montalvo made J.N. put his hands on the hood while searching his car and taking $400.  Physical corporal assault on the victim, it should be noted, is not required for force.  People v. Wright (1996) 52 Cal.App.4th 203, 210.  All that is required is that defendant assert some quantum of force necessary to accomplish the mere seizing of the property.  People v. Anderson (2011) 51 Cal.4th 989, 995.

The appellate court found no fear was used in committing either theft, surprisingly.  This, the court noted, was a subjective issue.  Neither J.T., I.A., nor J.N. testified that they feared immediate or unlawful injury at the time of the theft.

We present this short summary for the reader to point out how robbery is viewed broadly and some may say, is almost interchangeable with theft.
The citation for the Third Appellate District Court ruling discussed above is People v. Robert Antonio Montalvo (3d App. Dist., 2019) 36 Cal.App.5th 597.
For more information about robbery, please click on the following articles:
Contact us.