This prison has been called “the largest addiction treatment center in the world.”  It is a male-only prison and is located about an hour north of Bakersfield, up Route 99.  The facility has two identical treatment facilities, each with 739 beds.  In the program, inmates undergo at least 20 hours a week of individual and group substance abuse counseling, addiction education, relapse prevention, living skills workshops, anger management, conflict resolution and even a class called, “identification and change of the criminal thought processes.” 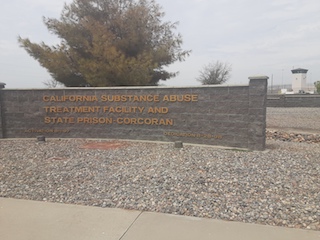 CA State Substance Abuse Treatment Facility and State Prison Corcoran
The prison opened in 1997.  Phil Spector, the famous music producer known for his “Wall of Sound” innovation, is currently serving a 19 year to life term there after his 2009 conviction for murder.  Robert Downey, Jr., served a three year sentence there in 1999 to 2000 (completed in one year) for a parole violation from a 1996 conviction.
Serving Torrance, Long Beach, Compton, Airport Courthouses and Other Courthouses.