This is a male-only prison in the desert in the far southeast corner of our state, near El Centro, California and the Mexican border.  It is reached by either driving first down to San Diego and then east about two hours.  In December, 2008, it had just over 5,000 inmates, with a design capacity of about half of that.  Since then, however, due to AB109, the inmate numbers have surely reduced.  This is a relatively newer prison, opening in 1993. 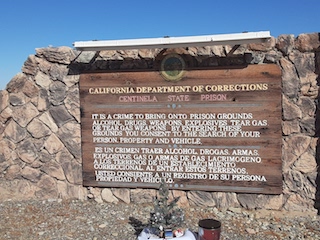 California State Prison, Centinela
If one were to escape from this prison, one would find oneself having to traverse over 15 miles of open desert to the next city.  The facility is ringed by two sets of barbed wire fences.
Serving Torrance, Long Beach, Compton, Airport Courthouses and Other Courthouses.