Avenal is a low to medium security prison located near the town of Avenal in Central California.  It is the largest and perhaps most overcrowded of California prisons.  It has a design capacity of approximately 2,900 inmates, but houses over 5,000 as of January 1, 2013.  The prison itself is located about 180 miles north of Los Angeles off the I-5 Freeway, in King’s County.  The prison is located outside the town of Avenal, which lists its population at 15,000 people (this includes the 5,000 or so in the prison).  Over 1,000 people living in the town work at the prison. 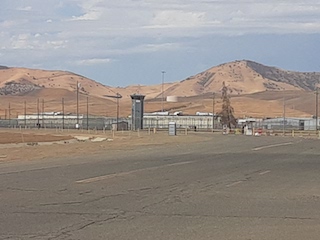 Avenal State Prison
Programs at the prison include Narcotics Anonymous (NA), Alcoholics Anonymous (AA), sap, auto body, metal fabrication and plumbing and electrical, furniture making, warehouse and egg production.  The prison received quite a bit of press in 2005 and 2006 when three of its inmates died from “Valley Fever” there and the adequacy of the prison’s medical care was heavily criticized.
Serving Torrance, Long Beach, Compton, Airport Courthouses and Other Courthouses.