In 2011, the California legislature in Sacramento passed the Post Release Community Supervision Act of 2011, which had a “tough crime” theme.  It allowed incarceration or revocation of supervision (jail) for people who violated the terms of their post-release community supervision, even for nonviolent drug possession crimes or violation of a drug-related parole condition (NVDP).

In 50 Words or Less:  The Post Release Community Supervision Act of 2011 Regarding New Drug Offenses Violates Prop 36, the Court of Appeal Finds.

This new provision was unchallenged until now, four years later.  The case of Evan Armogeda exposed the problems of this act insofar as it seemed to wipe away the safety net of Prop 36.

Proposition 36 was passed in the year 2000 and, at Penal Code §§ 1210, 1210.1 and 3063.1, prohibited revoking parole and incarcerating a parolee based on a NVDP (defined above) and required completion of a drug treatment program instead.

Mr. Evan Armogeda was convicted in 2011 of possessing a controlled substance in violation of Health and Safety Code § 11350(a).  After serving a prison sentence, he was released on post release community supervision. 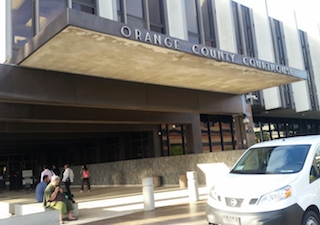 Orange County Courthouse
What exactly is post release community supervision?  Good question, as many judges, defense attorneys and prosecutors appear not to know.  After AB109 was passed to “realign” our state prisons by changing certain prison sentences to county jail sentences, a person released from prison was subject to either a period of parole (Penal Code § 3000, et seq.) or post release community supervision (Penal Code § 3450, et seq.).
Parole applies to high level offenders, i.e. third and second strikers, sex offenders with a high risk of reoffending, persons convicted of serious and violent felonies, or those with severe mental disorders.  All others released from prison are placed on post release community supervision (Penal Code § 3451(a)).

Eight months later, he plead guilty to possession of a controlled substance in violation of Health and Safety Code §§ 11350 and 11377.  He was placed on probation.

This new offense, committed while on post release community supervision, caused the probation department on Armogeda’s first case to petition to revoke his supervision.  This petition, if granted, would send Armogeda back to prison or jail due to the new provisions of the Post Release Community Supervision Act of 2011.

The trial court in Orange County rejected Armogeda’s argument and sentenced Armogeda to 90 days in county jail and to enroll in a drug treatment program after he was released from jail.  He was also ordered to report to the probation office.

The probation department again filed a petition to revoke community supervision and the judge sustained it, sentencing Armogeda to sixty days in county jail with the same post-release requirements.

Armogeda then appealed the county jail sentence to the Fourth Appellate District.  His argument was that prior to the Post Release Community Supervision Act of 2011, he would have been classified as a parolee and for his nonviolent drug possession, he would have been ordered to drug treatment, not jail.  He next argued that the 2011 act, by amending Proposition 36 (a voter initiative), was unconstitutional under the California Constitution.

The California Constitution limits the Legislature’s power to amend an initiative statute such as Prop 36.  The initiative may only be amended or repealed if the voters specifically gave the Legislative that power.  In the case of Prop 36, the initiative did allow amendment by the Legislative only when approved by two thirds vote of each house and when such amendment furthers the proposition and is consistent with its purposes.

The Fourth Appellate District, at People v. Evan Taylor Armogeda (2015 DJDAR 837), noted from the outset that the Post Release Community Supervision Act of 2011 did not receive two thirds of the vote or each house, so it could not amend or repeat the provisions of Prop 36.  Therefore, the 2011 act was unconstitutional insofar as it changed the punishment applicable to those with NVDP offenses.

We find this ruling very good and yet, lament the hundreds of folks who undoubtedly have been sent to prison since 2011 rather than treatment for nonviolent drug passion matters.
The citation for the Fourth Appellate District Court ruling discussed above is People v. Evan Taylor Armogeda (4th App. Dist., 2015) 240 Cal.App.4th 1039.
For more information about the issues in this case, click on the following articles:
Contact us.