Home
Other Information
Criminal Defense Articles
A Presidential Pardon – Why Apply, When, Limits?

A Presidential Pardon – Why Apply, When, Limits?

A presidential pardon is covered on this website because the topic has arisen in the context of how one restores one’s Second Amendment rights after suffering a felony conviction in California or even a misdemeanor conviction for domestic violence (including Penal Code § 273.5 or § 243(e)(1)).  After all, such convictions result in a federal ban of one’s right to own, possess or purchase a firearm for life under the Lautenberg Amendment.  However, a presidential pardon cannot lift such a ban because the President may only pardon federal convictions, those adjudicated in the Superior Court of the District of Columbia and military court martial proceedings.

Why This Article Matters: A Presidential pardon is not required to restore one’s Second Amendment rights unless the rights were revoked following a conviction in federal court.  If the rights were taken away from a conviction in state court, a pardon from the Governor is need if relief under Penal Code § 17(b)(3) is unavailable, or other methods are not available.

If one is seeking a pardon of a federal conviction, a conviction from a Superior Court in the District of Columbia or a military court martial conviction, then this article is for you.

First and foremost, it is good to understand that a presidential pardon is a signal of forgiveness and is granted in recognition of the applicant’s acceptance of responsibility, including remorse, for the crime, as well as proven good conduct for a significant period of time after the conviction or release from confinement.  It should not be interpreted as vindication or seen to establish innocence as the press and media often characterizes a pardon.

To apply for such a pardon, one must first satisfy the five-year waiting period from the time one is released from confinement or if no confinement was ordered (only probation ordered), five years from the date of sentencing.  The applicant must have also satisfied all terms of the sentence, including public service, fines and restitution, if ordered.

If one is seeking a pardon of a court-martial conviction, one should submit the application to the Secretary of the military department (i.e., Navy/Marine Corps, Army, Air Force) that had jurisdiction over the case.  It merits mention that a pardon will not change the character of discharge – if it was a bad conduct discharge (BCD), it will remain a bad conduct discharge despite the pardon. 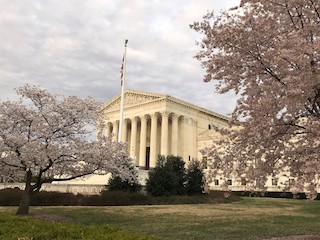 U.S. Supreme Court
In seeking a Presidential pardon, it is very important to be fully candid.  For example, in response to question 7, one must disclose any arrest by any state, local, federal or foreign authority, including for DUI, for example.  Failure to disclose even such an arrest, whether or not it resulted in a conviction, may be construed as falsification of the petition.

In response to question 14, one must list all delinquent credit obligations, whether or not they are in dispute, as well as all civil lawsuits in which one was named as a party, including bankruptcy proceedings.  One must also list all unpaid tax obligations, whether federal, state or local.

The references may discuss any hardship one is suffering from the conviction and the nature and extent of any post-conviction community involvement, including in any charitable or other meritorious activities.

It should be noted that a pardon does not erase or expunge the record of the conviction.  Even if one received a Presidential pardon, one must still disclose the conviction on any form where such information is required.

No hearing is held on the pardon application.  There is no appeal from the President’s decision to deny a pardon, however, one may submit a new petition for consideration two years after the date of denial.

Lastly, it should be noted that the Office of the Pardon Attorney does not disclose information regarding the nature or results of any investigation that may have been undertaken in any particular case.  The specific reasons why the President grants or denies the application generally is not disclosed by the White House or the Department of Justice.  A Freedom of Information Act request will not result in disclosure of such documents, if any exist.
For more information about post-conviction relief, please click on the following articles:
Contact us.