Home
Other Information
Criminal Defense Articles
When Is a Traffic Stop by Police a Detention for a DUI?

When Is a Traffic Stop by Police a Detention for a DUI?

Evidence gained during a DUI investigation is inadmissible if it is the product of an illegal detention.  If, however, the suspect consents to talking to the police or performing field sobriety tests, the police officer does not need to justify his encounter with the suspect.

Brief Synopsis: A traffic stop for DUI becomes a detention when “by means of physical force or show of authority,” a police officer has “in some way restrained the liberty of a citizen . . . [such that] if in view of all of the circumstances surrounding the incident, a reasonable person would have believed that he was not free to leave.” or “otherwise terminate the encounter.”

In the case of Shauntel Ray Brown, San Diego County Deputy Sheriff Geasland pulled up behind a parked car with Mr. Brown sitting in the driver’s seat.  As Geasland pulled behind him, he activated his overhead emergency lights. 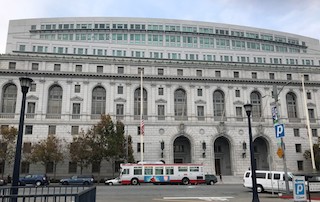 California Supreme Court San Francisco
Geasland got to the scene within three minutes.  As he drove into the alley, he saw a car coming towards him away from the location of the fight.  Geasland stopped the car and asked the driver, Mr. Brown, if he saw a fight.  Brown did not respond and kept driving.
Geasland then went down the alley and saw no one.  He decided to circle the block to check out the front of the houses who had their back to the alley.  He then came upon Brown, parked along the street.  Geasland suspected Brown was involved due to his silence in response to the question about the fight.

Brown was sitting in his parked car.  Geasland thought Brown also might have been injured, so he pulled behind Brown and activated his overhead lights.

Brown identified himself, produced his driver’s license and talked to the officer.  Geasland noticed that Brown was mumbling and had bloodshot eyes.  Geasland claimed he also could smell alcohol.  He asked if Brown had been involved in the fight and Brown said yes.  He also asked Brown if he had been drinking and Brown also said yes.  He was then given a breath test, registering a BAC over 0.15%.

Brown was then charged with felony DUI because he had three prior DUI convictions.  Brown moved to suppress the evidence of his mumbling, bloodshot eyes and breath alcohol content, arguing that it was the fruit of an illegal detention.  At the trial level, his motion was denied and Brown entered a no contest level to felony DUI.  He was sentenced to two years in county jail.

Brown then appealed the ruling to the court of appeal and then to the California Supreme Court.

The California Supreme Court affirmed the court of appeal and the trial court, beginning its analysis by noting that an officer may approach someone in a public place and ask them questions.  If the person voluntarily answers, the consensual responses and the officer’s observations are admissible in a criminal prosecution. Florida v. Bostick (1991) 501 U.S. 429, 434.

However, when an officer, “by means of physical force or show of authority, has in some way restrained the liberty of a citizen,“ the officer effects a seizure of the person, which must be justified under the Fourth Amendment. Terry v. Ohio (1968) 392 U.S. 1, 19, fn. .16.  When a police officer shows authority (not physical force), a person is seized “if in view of all of the circumstances surrounding the incident, a reasonable person would have believed that he was not free to leave.” or “otherwise terminate the encounter.”  Brendlin v. California (2007) 551 U.S. 249, 254-55.  It is then a seizure if the person submits to the show of authority.  Id.

Turning to the Brown case, the court found that Geasland’s show of authority was using his overhead lights and pulling behind Brown.  A reasonable person would believe he or she was not free to leave, said the court.  Brown then submitted to the authority by staying parked and then talking to Geasland.

Did the detention pass Fourth Amendment analysis?  Absolutely yes, said the California Supreme Court, given the totality of the circumstances and Brown’s suspicious behavior.  The police had a reasonable suspicion that he was involved in a crime -  either the fight or DUI.  Thus the ruling was affirmed and Brown’s appeal was denied.
The citation for the California Supreme Court ruling discussed above is People v. Shauntrel Ray Brown (2015) 61 Cal.4th 968.
For more information about traffic stops, click on the following articles: