Whenever someone is suspected of murder or even arrested for murder, consideration must be given to whether there is any chance at all to resolve the case on other grounds that result in less punishment.  One such alternative ground is if the prosecutor will agree to amend the complaint to allege voluntary manslaughter (Penal Code § 192(a)), a lesser included offense of murder.  This might be due to facts that suggest a heat of passion / sudden quarrel / provocation situation or imperfect self-defense.

Heat of passion is a term that covers facts wherein defendant kills someone because of a sudden quarrel or in the heat of passion if defendant was provoked, then as an immediate result of the provocation, acted rashly and under the influence of intense emotion that obscured his reasoning or judgement; and the provocation would have caused a person of average disposition to act rashly and without due deliberation, “that is, from passion rather than from judgment.”

Heat of passion does not require, but it often involves, rage, anger or jealousy.  Slight or remote provocation is not sufficient, but sufficient provocation can take place over a short or long period of time. 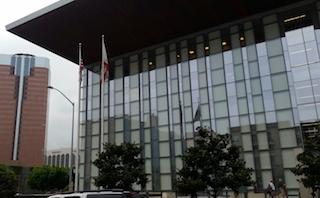 Long Beach Courthouse
Jurors struggle with this concept because, on one hand, a violent person with volatile temperament is not allowed to simply set up his own standard of conduct and avoid a conviction for murder.  The provocation must be enough that a person of average judgement and emotional stability would have been similarly provoked.  If the time that passes between the provocation and the killing is enough for an average person to “cool off,” the killing is not reduced to voluntary manslaughter.
In People v. Breverman (1998) 19 Cal.4th 142, 163-164 [77 Cal. Rptr.2d 870, 960 P.2d 1094], for example, there was sufficient evidence of provocation when a mob of young men trespassed onto defendant’s yard and attacked defendant’s car with weapons.  Mere vandalism of a vehicle, however, is insufficient for provocation.  Breverman, at 164, fn. 11.

To act in imperfect self-defense, the defendant must actually believe that he or she, or another person, was in imminent danger of being killed or suffering great bodily injury.  Belief in future harm is insufficient – it must be imminent.  Great bodily injury in this context means significant or substantial physical injury.

Defendant next must actually believe that the immediate use of deadly force was necessary to defend against the danger.  For such a defense to be considered “imperfect,” one of the beliefs must be unreasonable.

For more information about manslaughter, please click on the following articles:
Contact us.
Serving Torrance, Long Beach, Compton, Airport Courthouses and Other Courthouses.