What Probation Conditions Are Unconstitutionally Vague?

The Gist of this Article: Probation conditions that are so vague and ambiguous that they do not let the probationer know what he or she can or cannot do are unconstitutional.  Such conditions are further objectionable because police would have too much discretion to arrest someone for a vague condition.

Every day, in perhaps every criminal courthouse in the State of California, judges will sentence people and impose probation conditions.  Such conditions often include orders that the person may not go into any establishment where alcohol is the “chief item of sale,” use or possess any “dangerous drugs” or own or possess any weapon that can be concealed on his person.  Judges often even impose such conditions in cases having nothing to do with alcohol, drugs or weapons.  As an attorney who listens in court to other cases, I have heard such conditions imposed in a shoplifting case.
More importantly, if such conditions are ordered in a case, are they clear enough to let the probationer know what he or she cannot do?  It is a notice issue.  The person must be on notice, or aware of, what he or she cannot do.  If notice is unclear, i.e. if the condition is so vague or ambiguous to prevent this, the condition is unconstitutional.  In re Sheena K. (2007) 40 Cal.4th 875, 892.  Put another way, if a person of common intelligence must guess at a probation condition’s meaning or people of common intelligence would differ in opinion as to the condition’s application, the condition is improper. 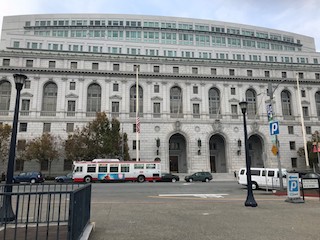 Court of Appeal First Appellate District San Francisco
The reason for this is that for one to violate probation, the violation must be willful. People v. Cervantes (2009) 175 Cal.App.4th 291, 295.  Probation may not revoked unless the evidence shows the probationer’s conduct constituted a willful violation of the terms of probation. People v. Galvan (2007) 155 Cal.App.4th 978, 983.
In the case of Deron Diamond Gaines, in a Contra Costa case, he was charged with second degree vehicle burglary (Penal Code §§ 459, 460(b)) and felony theft.  It was further alleged that he had seven prior convictions (six felonies and one misdemeanor) and had served four prior prison terms (Penal Code § 667.5(b)).  A jury found him guilty of the vehicle burglary and felony theft.  The judge found the prior conviction allegations to be true.  The judge then imposed a split sentence of four years in county jail and two years of mandatory supervision.

At sentencing, the judge imposed conditions that, “you shall not use, possess or have under your custody or control any narcotics, dangerous drugs or narcotic paraphernalia;” “you must abstain from the use of alcoholic beverages and marijuana, and you may not go to any establishment where alcohol is the chief item of sale;” and “you are not to own, have in your possession, custody or control, any handgun, rifle, shotgun or other firearm whatsoever, or any weapon that can be concealed on your person.”

Mr. Gaines challenged such conditions as unconstitutionally vague.  The First Appellate District agreed, noting that an establishment where “alcohol is the chief item of sale” may not be intuitively obvious, as it could be the chief item of sale even in a bowling alley, a pool hall or football stadium, even though the chief purpose of the location is recreational.  Even a convenience store’s chief item of sale may be alcohol, although it sells other items, too.

As to the drug condition, the court noted that various drugs could be considered dangerous even when used for legitimate medical purposes, even if used with a prescription.  In fact, Business and Professions Code § 4022 defines a “dangerous drug” as one that cannot be used without a prescription.  Moreover, even over-the-counter drugs can be considered dangerous if used in sufficient quantities.  Instead, the probation condition should use the terms “controlled substances” in place of dangerous drugs to remedy the ambiguity.

As to the weapons condition, the appellate court did agree that the “concealed weapons” prohibition was constitutional, but found that the condition regarding possession of “any weapon” would necessarily include items that are not thought of as primary weapons, but could be used as weapons, such as a screwdriver or wrench.  Instead, the probation condition should use the terms “items that are specifically designed as weapons” instead of simply “weapon” to cure the ambiguity.

We think this opinion, People v. Deron Diamond Gaines (2015 DJDAR 12954), is a good appellate opinion for reminding attorneys how to prevent probation conditions that only lead to a client being alleged to violate probation when the client did not understand what restrictions his probation included.
The citation for the First Appellate District Court ruling discussed above is People v. Deron Diamond Gaines (1st App. Dist., 2015) 242 Cal.App.4th 1035.
For more information about the issues in this case, please click on the following articles:
Contact us.