In a Nutshell: Manufacturing a controlled substance is a serious felony that can be punished by three, five or seven years in state prison.  Formal probation is possible, depending upon the case facts and the client’s criminal history, but probably not without some significant jail time.  The crime can be committed by being involved in only a very small part of the manufacturing process.

If you are charged with manufacturing a controlled substance, you may be puzzled as to what evidence is required by the prosecution to convict someone of this charge.  One does not have to be caught red-handed with an entire meth lab to be guilty.

The prosecutor must show that the person arrested or charged “manufactured, compounded, converted, produced, derived, processed, or prepared, either directly or indirectly by chemical extraction or independently by means of chemical synthesis, any controlled substance specified in Health and Safety Code section 11054, 11055, 11056, 11057, or 11058.”  These include meth, hashish, GHB, PCP, ecstasy (or “X” or “molly”), heroin and LSD.

If the prosecutor can show this, the punishment is harsh – it is either three, five or seven years in state prison, as well as a fine up to $50,000.  Health and Safety Code § 11379.6.  If children reside in the location where the manufacturing is ongoing, there is an additional five years in state prison. 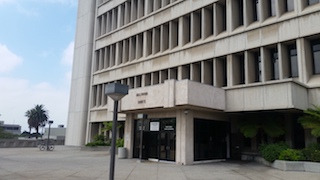 Inglewood Courthouse
There are additional sentence enhancements if there are large quantities of meth, GHB or PCP (measured in pounds or gallons) or the person has a prior history of drug convictions, was recently in prison or causes someone to be injured or killed from drug use.  We also find there can be gang enhancements to such charges.  While such penalties do sound harsh and indeed are, probation is never something that should be overlooked or ignored as a possibility.
Merely offering to manufacture a controlled substance is often charged, too.  It carries with it a penalty of three, four or five years in state prison.
It punishes, for example, the way one processes marijuana material into concentrated cannabis, i.e. “wax” or hashish from marijuana.  Chemical extraction is removing part of the mixture from other parts present.  It can be dangerous, as it requires mixing flammable liquids.  It is similarly dangerous to manufacture other forms of controlled substances from cocaine base, cocaine, opium, hallucinogenic drugs and a host of other substances.

The prosecutor often attempts to prove that one is manufacturing a controlled substance by the types of precursor chemicals or equipment that police find at someone’s house, commonly in a locked garage, a shed or in a bathroom.  These can include chemicals used to manufacture methamphetamine or PCP.  With meth, this may include large quantities of pseudoephedrine, a formerly common ingredient in cold medication (used in meth), sodium hydroxide (used in PCP), as well as Bunsen burners or a camping stove, pumps, filters, plastic hosing or tubing and glass containers.

While having such items seems to be strong circumstantial evidence of intent to manufacture a controlled substance, the prosecution must look for other indicators of an intent to manufacture meth or marijuana compounds, for example.  After all, some items found by the police may appear suspicious, but they may have legitimate uses and bona-fide reasons for being in the client’s possession.

The prosecutor does not need to prove that someone took part in the entire process of manufacturing a controlled substance from start to finish.  If someone merely participated in the initial or end stages, or an intermediate step, that can be enough for a conviction.

In defending such cases, we find that the most common defense is that the police conducted an illegal search and seizure.  Police will often learn of a lab being in operation and in a hurry, rush to the location and break in without properly securing a proper search warrant based on sufficient probable cause.

Sometimes, our client is present, but has no idea that the other people were manufacturing controlled substances.  Lastly, the defense may be that although defendant did intend to manufacture a controlled substance, what he or she had done was “merely preparatory” and not a substantial enough step toward attempting to commit the crime.