Home
Other Information
Criminal Defense Articles
What Is Insurance Fraud? The Punishment? Defenses?

What Is Insurance Fraud? The Punishment? Defenses?

Insurance fraud is a crime that covers a broad range of conduct.  It can include unemployment insurance fraud, auto insurance fraud and many other areas.  Being charged with such a crime naturally involves a feeling of horror, mostly because the client has usually already received the insurance payment and spent it, meaning he or she cannot quickly pay back the money received.

What to Take Away:  Insurance fraud is a felony that can result in two years or more of state prison, although probation is certainly possible, especially if one is able to pay back the insurance company for the money obtained illegally.  Health insurance fraud, however, is a wobbler, meaning it can be charged as a felony or a misdemeanor, depending upon the facts of the case and defendant’s criminal history, if any.

Moreover, it is a serious conviction with the lasting stigma of serious, deliberate dishonesty, as it involves careful fabrication or sophisticated exaggeration to obtain money and can involve punishment involving prison of two, three or five years.  In short, it is “playing a trick” on a company in an industry that meticulously pays attention to details.
Often, the client will have a prior conviction for this type of conduct, adding two years for each prior conviction for similar conduct.  Restitution can also be as high as $150,000 in workers compensation fraud matters.  Moreover, the case can be prosecuted in federal court or state court, depending upon the circumstances. 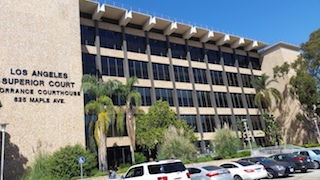 Torrance Courthouse
This article will not cover unemployment insurance fraud or auto insurance fraud, as the links below this article cover such separate areas.  Instead, it will address health insurance fraud, worker’s compensation fraud and property damage fraud.  These claims can involve a medical facility submitting requests for reimbursement to an insurance company for procedures not performed (i.e. phantom billing), overbilling, or billing twice for the same procedure (double billing).  It can also involve a worker who is employed, but claims he or she is not, and deliberate damage to one’s property to obtain insurance payments.  Penal Code §§ 548 – 551 and Insurance Code §§ 1871 – 1871.9.
The common denominator of any insurance fraud claim is the intent to defraud, meaning the knowing misrepresentation of the truth to exaggerate a claim or mislead as to the cause of a claim.  In evaluating the “knowing misrepresentation,” it is important to analyze the experience and background of the defendant.  Is he or she a new doctor or someone who has been practicing 30 years?  Did defendant know what he or she was doing was wrong?
Health insurance fraud is defined at California Penal Code § 550(a) and also, when Medicare or Medicaid is the “victim,” at 18 U.S.C. § 287 and 18 U.S.C. § 1001.  Under California law, it is wobbler, meaning the crime can be charged as a felony or a misdemeanor, based on the facts.  The most important fact is the dollar value of the false claim, with $950 as the limit for a misdemeanor accusation and above $950 being a felony case.  With a misdemeanor conviction, punishment can involve probation or up to six months in county jail and a $1,000 fine, plus restitution of the illegally obtained health insurance proceeds.
When health insurance fraud is charged as a felony under California law, the punishment increases.  The fine can be up to $50,000 or double the illegal benefits received.  The defendant will certainly also have to repay the illegally obtained insurance payment.  While probation is possible, a state prison term of up to five years is also possible (the sentence would most likely be served in county jail, however, under AB109).
Under federal law, the punishment is more severe.  The monetary penalties can be under both civil and criminal procedures and prison terms can reach up to twenty years in the most extreme cases when bodily injury is involved, but is otherwise up to five years per false claim.  A penalty can be up to $250,000 per incident.  If a company is involved, as is not uncommon, the penalty can be $500,000 per incident.  As with state court cases, the defendant must also repay the money fraudulently obtained.

For more information about crimes involving fraud and restitution in general, please click on the following articles:
Contact us.