Home
Other Information
Criminal Defense Articles
What Is Extortion or Blackmail? The Defenses? Punishment?

What Is Extortion or Blackmail? The Defenses? Punishment?

The Gist of This Article:  Extortion, also known as blackmail, is narrowly defined and often mistaken for debt-collecting on pre-existing contractual relationships such as a bail bond contract.  There are certain defenses that one can read about in the article below.  Extortion is always a felony with a maximum prison sentence of four years before any sentencing enhancements are applied.

The threat or use of force must be successful in causing the victim or public official to actually do what was intended by defendant, in compliance with the force or threat to avoid the threat.  This means to avoid the threat, which can be to use force to cause physical injury, to accuse someone of a crime, or expose a private secret of someone.
A secret that qualifies as sufficient for threatened exposure is something the general public does not know, but would be interested in knowing and which harms the victim’s reputation enough that he or she is willing to pay or give over property to prevent the secret’s disclosure.
This crime is statutorily prohibited at Penal Code §§ 518, 522 (extortion by signature) and 523 (when done by letter). 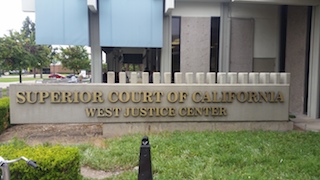 Westminster Courthouse
Extortion is sensationalized in Hollywood movies by scenes in which a criminal drives someone to a bank and then, with a loaded weapon touching the bank account holder’s lower back, forces the unwilling bank account holder to withdraw a large sum of money for the criminal.  The coercion is persuasive in causing the victim to hand over the money.  More commonly, a married man may be having an affair with his secretary.  The secretary threatens to report the affair to her boss’ wife or file a police report for rape unless he buys her a new Mercedes.  He then buys her the Mercedes.
The crime of extortion is tough to defend when the threat is in writing, but when it is allegedly spoken, the most common defense is simply that the threat was never made, if this can be made in good faith.  Such a defense necessarily involves an explanation of why the accuser lacks credibility or why the accuser is motivated to make such a threat.  This can involve a painful revelation of private information, which can itself be hurtful if the victim is a politician, sports figure or celebrity, or elderly
.
The other defense is that the so-called threat was not the controlling reason the “victim” performed the act.  It may be that the victim had independent reasons or motivation to perform the act regardless of the alleged threat.  An example of this is when a public official asks for a donation to help build something of public benefit.  The public official contacts a citizen who would greatly benefit from the new structure, perhaps a paved road connecting two towns, but also hints that without the contribution, he will reveal his tax evasion.  The citizen makes the donation, but not to avoid the accusation as much as to benefit from the new road.
We often hear of clients saying a bail bondsman is extorting the family for money and threatening that if a payment is not made, the family member will have his bail bond revoked and be remanded.  This is definitely not extortion because the bail bondsman is contractually entitled to the payments on the bond, so the controlling reason the victim pays the bondsman is not the threat, but the signed promise to pay in the contact.
The maximum penalty for committing extortion is four years in state prison (Penal Code § 520).  It is always a felony.  More commonly, attempted extortion is alleged, wherein the “victim” refuses to comply with the coercion.  Attempted extortion can be filed as a felony or a misdemeanor.  Attempted extortion can involve punishment of up to a year in county jail or state prison and a fine of up to $10,000 (Penal Code § 524).
For more information about police misconduct, please click on the following articles:
Contact us.