Home
Other Information
Criminal Defense Articles
What Is Drug Court? Who Is Eligible and Ineligible?

What Is Drug Court? Who Is Eligible and Ineligible?

Brief Synopsis:  Drug court is a highly structured program with close oversight by a judge.  It is time consuming and rigorous, but graduating from drug court will allow the participant to avoid a conviction and hopefully, through the regular court appearances and regular drug tests, overcome the addiction.

In Los Angeles County, Drug Court has been the forum for a person struggling to overcome their addiction to get intensive help and frequent monitoring they need to remove illegal drugs from their life, leave the cycle of being in and out of court and become productive members of society.  It is free, but it is tough.  It is exactly the type of rigorous program that is needed to overcome addiction.
Those who face current charges of selling, transporting or manufacturing drugs are ineligible for drug court.  Those who have prior strike convictions or prior convictions for sales are also ineligible.  In addition, anyone with a prior conviction for a crime of violence, even if a misdemeanor, are usually ineligible, although this basis for ineligibility can be waived by the program if the prior violent crime is many years ago or extremely minor in nature.  Lastly, if one has a conviction for grand theft while using a firearm, a conviction for a crime against an elderly or dependent adult (i.e. Penal Code § 368) or any crime being in furtherance of a street gang, that person is ineligible for drug court. 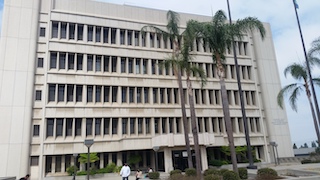 Inglewood Courthouse
Who is eligible?  Those who are accused of drug possession, i.e. facing charges of violating Health and Safety Code §§ 11350, 11377, 11364, 11365 or 11550, and those accused of lower level theft offenses when no organized criminal activity and minimal financial loss is alleged, but when the theft is motivated by a need for money to fund a drug addiction.  Such theft offenses are for Penal Code §§ 459, 666, 484 and 487, as well as Vehicle Code § 10851 (joyriding).
The program is intense, although it involves outpatient treatment, usually in the form of daily narcotics anonymous meetings with a sponsor, as well as random drug testing.  Weekly court appearances are not unusual.  It is tough at first.
The program generally lasts nine to twelve months.  Each program differs, but the general approach is to have daily intervention in the form of narcotics anonymous meetings every day, at least at the start of the program.
If a program participant tests dirty more than once, the judge can order the person to jail to get away from drugs.  Some judges require that a participant spend the first 45 days in custody in a drug treatment pod, but other judges do not require this of every participant.
At the start of the program, there are two ways the participant can handle the underlying case.  The first way is by pleading no contest or guilty to the charges, but imposition of the sentence is stayed (no conviction) and the person then participates in the program.  The second way is that the person is referred to the program without entering such a no contest or guilty plea.
In both methods, when the person successfully completes the program, accompanied by a short graduation ceremony usually with the judge coming down from the bench to shake the successful participant’s hand, the case is then dismissed and there is no conviction.
If one fails out of drug court, either a conviction is entered and the person is sentenced to jail or probation, or the case is referred back to the trial court for further proceedings.