Our 23 year-old client regularly went to a local bar for drinks after work, often with co-workers.  He knew the bar manager, the bouncers and most of the other regular patrons.  He felt a sense of loyalty to the manager and wanted the bar to be peaceful.

It was a Friday night, so there were a few more people in the bar than on other weekdays.  Our client was there with two friends, playing pool.  There was one particular older man, age 36, in the bar, alone.  He was drinking heavily, alone.  He then came over to our client and his friends playing pool and demanded to join the game.

Our client’s friends said, “no, not this game.”  The man immediately became irritated and took the declined invitation as a personal insult.  He demanded that the two “take it outside.”  Our client and his friends did not know if the other man was serious, but realized he was.  As the older man approached our client’s friend to step in, our client intervened and escorted the man outside the bar, effectively acting as a bouncer.  The older man told our client, “I’ll get even.”

The older man returned to the inside of the bar almost immediately and began arguing with another group of people.  Our client looked over at the confrontation and the older man glared back at our client as if to say, “don’t try to bounce me out again or I’ll fight you.”  Such a challenge was a bit ridiculous, because our client was well over 200 pounds and six feet, three inches tall.  Not only was he about eight inches taller and 50 pounds heavier than the other man, he was about 15 years younger.

Our client later went out to the parking lot of the bar to smoke a cigarette.  He leaned up against his friend’s car while smoking.

Our client following with two more punches to the man’s face as he fell down.  A security camera in the parking lot recorded the knock down.  He had broken the older man’s jaw in several places.  This was quite a significant act, as our client had no prior criminal history and a steady job for the last four years. 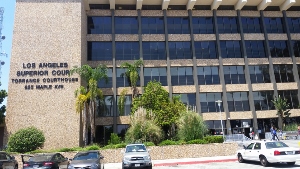 The case proceeded past the preliminary hearing and the offer did not improve.  The client then hired Greg Hill, who prepared a defense position letter and obtained a declaration from the client’s friend who was almost assaulted by the older man earlier in the evening.

The prosecutor understood the facts a bit better, she said, after reading the defense position letter.  They agreed to allow our client to plead to a violation of Penal Code § 245(a)(1), assault with a deadly weapon (his fists), causing great bodily injury (a strike offense), but with no jail.  No prison, either.  Our client was required, as a term and condition of probation, to complete 52 anger management classes, 104 Alcoholics Anonymous (AA) meetings, perform 60 days of Cal-Trans and stay away from the bar at issue.

For more information about sentencing and restitution, please click on the following articles:
Contact us.
Serving Torrance, Long Beach, Compton, Airport Courthouses and Other Courthouses.