On the evening in question, she and her-then boyfriend decided to go the Normandie Casino to relax and play poker.  Our client volunteered to drive because she anticipated her boyfriend would drink quite a bit.

The Gist of This Summary:  Our female client, age 43, allegedly scratched and hit her boyfriend when both were drunk and returning from the Normandie Casino.  Case filed in the Torrance Superior Court and resolved through a delayed entry of judgement (DEJ) plea bargain.

This he did, becoming flirtatious with several other women, even aggressively so.  Our client saw this and told him to stop.  He told her to be quiet and he continued drinking and flirting with even more women.

Our client finally decided to leave him, not only as a boyfriend, but also to leave him at the casino, too.  She grabbed her keys and walked out to her car.  He noticed her leaving and ran after her, tripping over a large rubber orange warning cone.  He fell to the ground and skinned up the side of his face, but quickly got up and continued running to our client, finally catching her as she got in her car.

The two then drove home in silence.  Finally, he offered an apology, but our client took the opportunity to remind him of all his shortcomings.  In response, he reminded her of how poorly she had handled her parents’ declining health.  The two then argued without restraint.  Finally, as they neared home, she pulled over near a 7-11 and told him to get out of her car and walk home.  It was about 11:00 p.m.  He did, but not before grabbing her cell phone and taking it “hostage.”

This act, which he had done before in prior arguments, caused her to wait for him.  She did not want to lose her phone.  She then grabbed his phone and called 911.  Police arrived and saw her boyfriend’s scratched face, blood dripping onto his shirt, and immediately arrested our client.

The boyfriend even told police that nothing happened, but police did not believe him.  Our client refused to speak to the police at all.

Approximately four hours later, our client was released from the Torrance Police Department.

The next day, she hired a very expensive law firm that advertised itself as domestic violence experts.  They promised her a dismissal and charged her a large retainer fee.

However, after three court appearances in the Torrance Superior Court, they told her a dismissal was impossible and the best she could hope for was a conviction for battery, especially because the police had reported a prior incident of domestic violence between her and her boyfriend in the past. 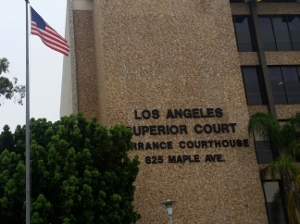 Torrance Superior Courthouse
She then called Greg Hill & Associates and spoke to Greg Hill.  Greg listened to the facts and explained that he thought a dismissal might be difficult, but that he certainly would do his best.  He gathered up the file materials, which included certain CD-ROM’s with audio recordings of the 911 call and asked the client to provide her resume and color copies of her many awards at work.

Greg then prepared a Defense Position Letter to the Torrance City Prosecutor handling the case, explaining the facts in detail, emphasizing the fact that even the victim told police our client did nothing, and attaching the client’s “Good Gal” packet, which was nearly twenty awards, certificates and letters of commendation.

In response, the Torrance City Prosecutor offered our client a dismissal if she “earned it” by going to 26 Alcoholics Anonymous (AA) meetings, attending 52 batterer’s program classes and paying three fees.  They were a $419 booking fee to the City of Torrance, a $500 domestic violence victims fund and $300 in court fees.  The client would also have to stay out of trouble for one year.

The client was very pleased with this.  The former law firm she had hired, who touted itself as domestic violence experts, could not negotiate this resolution.  She was very happy that she had instead hired Greg Hill & Associates and kept her record free of any conviction.

For more information about the issues in this domestic violence case, please click on the following articles:
Contact us.