Theft by False Pretenses by Not Paying Cab Driver?

In a Nutshell: Conviction for misdemeanor theft by false pretenses reversed on appeal in case of passenger in a cab who refuses to pay cab fare after cab driver goes the wrong way and gets lost.

Others, like Joshua Anthony Hartley as described in the following case, refuse to pay anything.

Hartley lived in San Jose and after work one evening, went out to a bar with friends in Los Gatos.  He called for a taxi cab at about 11:00 p.m. to take him home.

While waiting for the cab, he called his girlfriend and began an animated conversation.  When the cab driver arrived, Hartley remained on the phone while giving the cab driver directions.

Later at trial, Hartley testified that the driver “seemed confused” by the address.  So Hartley decided to just give him directions.  He told the driver to take Blossom Hill Road until it intersects with Leigh Road and then turn left on Leigh.

Hartley remained on the phone, looked up and realized the driver had missed the left turn on Leigh.  He told the driver to turn around and the driver cussed back at him, “Shut the F&*% up!”  Hartley testified at trial that he was astonished by the cussing from the taxi driver and told him to stop the car so he could just get out.  When the driver told him he would not stop, Hartley told him he was not paying for the ride.  The driver then stopped the cab, Hartley got out, slammed the door and began walking home. 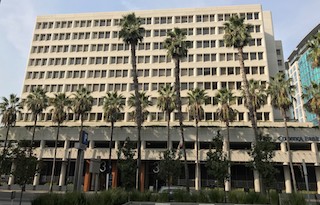 Court of Appeal Sixth Appellate District San Jose
The driver became upset and confronted Hartley, who then drew a four-inch pocket knife out and told the driver to leave.  The driver then brought out a bottle as a weapon.  At trial, the taxi cab driver, testifying with the use of a Somali interpreter, testified that Hartley then agreed to pay him the fare, which was $16.
Hartley was thereafter arrested and charged with felony assault with a deadly weapon (Penal Code § 245(a)(1)), felony criminal threats (Penal Code § 422) with an enhancement for person of deadly and dangerous weapon (Penal Code § 12022(b)(1)) and misdemeanor petty theft of labor (Penal Code §§ 484, 488).

The jury convicted Hartley of misdemeanor petty theft by false pretenses only.  The judge sentenced him to two years of summary probation and ordered him to pay some fines.

Hartley then appealed the conviction of theft by false pretenses, arguing it was unsupported by sufficient evidence.  His appeal was filed with the Sixth Appellate District.

The Sixth Appellate court agreed and reversed the judgment.  The court started its analysis by explaining that the crime of theft by false pretenses consists of three elements: (1) “the defendant made a false pretense or representation to the owner of property; (2) with the intent to defraud the owner of that property; and (3) the owner transferred the property to defendant in reliance upon that representation.” People v. Williams (2013) 57 Cal.4th 776, 787.

The appellate court found that at no point did Hartley develop the intent to deceive the driver and to get a free ride.  When looking at the evidence in the most favorable light to sustaining the verdict, the court noted that at one point, the driver asked Hartley if he should continue on the same street, to which Hartley responded, “where are we now?”  The driver then explained where they were and a torrent of swearing followed, including racial slurs.

When the driver then let Hartley out and asked for the fare, Hartley refused, saying, “I’m not paying for this.  It’s not how you talk to people.”  Hartley explained that he was upset that the driver seemed to be “running up the meter and I was not going to pay for that.”

In other words, Hartley decided not to pay because of his frustration with the driver and Hartley’s suspicion that the driver was trying to inflate the fare. However, the court noted, even if the jury had completely disregarded Hartley’s account, the remaining evidence offered no reasonable basis for a finding that Hartley “knowingly and designedly” made a false or fraudulent representation or pretense in order to defraud the driver.
The citation for the Sixth Appellate District Court ruling discussed above is People v. Joshua Anthony Hartley (6th App. Dist., 2016) 248 Cal.App.4th 620.
For more information about crimes involving theft by fraud, please click on the following articles:
Contact us.