Our client, age 43, had been married for nineteen years.  He had four children and no history of any domestic violence.  He had worked for the same large company for almost ten years.

Recently, however, he had discovered that his wife was cheating on him and he confronted her about it.  She admitted to it, but this definitely strained their relationship.  The financial demands of raising four kids, some of whom were teenagers, also added to the marital stress.  As a result of the family’s financial challenges, our client’s wife began working.

Why This Summary Matters:  Exhibiting a firearm can be a serious charge, which a prosecutor may refuse to dismiss in plea negotiations, but in the following case, we submitted a Defense Position Letter with a mitigation packet that helped resolve the case so the client would not lose his job.

The wife’s job was just a few blocks away and so when she got off work, often late at night, our client would walk her home.  They would have a few minutes to talk, which was good.

One night, our client met his wife to walk with her home and they started arguing.  It got heated and they said things they both regretted.  At one point, our client playfully kicked his wife in the rear, but not hard enough to hurt her.

When they got home, the argument continued, but it did not erupt into pushing, hitting or any physical violence.  However, our client took his pistol out of the safe and allegedly walked into the bedroom, where his wife was watching television.

Once inside the bedroom, he stood at the front of the bed, inserted a loaded magazine into the gun’s magazine well, racked the slide and thus, chambered a round.  He then laid on the bed on his back, with the gun resting on his chest, with a pillow over the gun.

His wife asked our client to put the gun away and he refused.  She then allegedly asked him to “think about the children,” to which he responded, “your family is going to be the one who suffers.”  She then told him she would call the police if he did not put the gun away.  He responded, “what are the police going to be able to do in five seconds.”

The wife then got up, walked out of the house and called the police.  Our client then returned to the safe and put the gun away.

The Los Angeles Police Department from the Harbor Division arrived and arrested our client.  When interviewing him at the scene, while he was handcuffed, he fell down due to extreme intoxication, badly bruising his face. 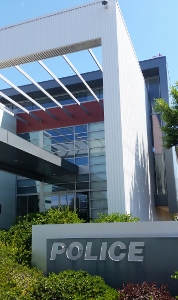 The wife was eager to see her husband carted away by the police, so she told the police everything in detail and the police did arrest him and take him away to jail.  He was arrested for spousal battery, a misdemeanor, for violating Penal Code § 243(e)(1).

He was released on $20,000 bail and then called Greg Hill & Associates.  Greg listened to the client explain what happened and his concerns with his employer finding out about the case.

Greg explained to him that he thought the Los Angeles City Attorney’s office might charge him with criminal threats (Penal Code § 422), as he suggested his wife’s family might experience danger to their safety, and brandishing a firearm (Penal Code § 417), as it appeared he showed the gun to his wife in a threatening manner when he loaded the pistol and chambered a round.  If such charges were added, bail could increase, Greg warned.

Greg then appeared with the client at the arraignment, as the client needed to be present to be served with a protective order in such a domestic violence case.  As feared, the complaint filed did allege criminal threats and brandishing a firearm.  Bail was also raised to $90,000 and our client was remanded into custody (“bucketed”).

The client’s parents thereafter did post bail and our client was released, but the plea bargain offered involved a plea to brandishing a firearm, criminal threats and spousal battery, then three years of summary probation involving ninety days in county jail, the fifty-two session batterer’s program, a $500 contribution to a domestic violence fund, a $200 court fine plus penalties and assessments, eighty hours of community service and surrendering his firearm.

After several months of court appearances in Long Beach Superior Court and much negotiating, including our preparation of a lengthy Defense Position Letter with a mitigation packet, the case ultimately resolved with a plea bargain to only misdemeanor criminal threats.  The charge of brandishing a firearm was dismissed by the prosecutor.

The plea bargain was still a bitter pill to swallow for our client, as he agreed to sixty days of house arrest, fifty-two batterers classes, a $500 contribution to a battered women’s shelter, a $200 court fee plus penalties and assessments, 52 Alcoholics Anonymous meetings and forty hours of community labor.

The client was happy most of all to avoid county jail and to see the brandishing a firearm charge dismissed, as this charge was what his employer told him would, if our client was convicted of this, lead to his termination.  With the charge being dismissed, our client would keep his job, which was a big relief for him.