Our client was in Arroyo Grande for work.  He had brought along his girlfriend, with whom he had lived for several years.  The couple was staying at a hotel behind an abandoned restaurant that was occupied by homeless people.

Our client had worked a long day, mostly in the sun, and was dog-tired.  He and his girlfriend went out to dinner and he had two beers with dinner.  The beers did the work of sleeping pills and he fell asleep almost instantly when they returned to the hotel.

The Gist of This Summary:  Client’s girlfriend assaulted by homeless person near an Arroyo Grande hotel.  The girlfriend returns to the hotel room with our client and the two argue.  Someone calls the police and police arrive, arresting our client for the injuries to his girlfriend caused by the homeless person.  Case filed in San Luis Obispo Superior Court as a felony, but resolved as a misdemeanor.

His girlfriend, however, could not fall asleep and so she took a walk.  As she was walking out from the hotel past the abandoned restaurant, a homeless person asked her for a light for her cigarette.  Our client’s girlfriend answered that she did not smoke and did not have a lighter.
The homeless person became enraged and assaulted our client’s girlfriend, punching her in the mouth so that her lips bled and then pulling her hair so hard that a portion of hair actually fell out from the roots.

Our client’s girlfriend was shocked and very scared.  She ran back to the hotel room and told our client what happened.  She was loudly screaming and crying.  Another person at the hotel called 911 and the police arrived to investigate the situation.

Our client’s girlfriend tried to clean herself up, but the bleeding continued.  She tried lying down to sleep, but her heart was racing.  Her blood got all over the hotel sheets.

Police knocked on the door of the hotel room and our client stumbled to the door to answer.  The police asked if he had been drinking that evening and he said he had.  They asked if he had ever been arrested for domestic violence and he told them that in fact, he was convicted of domestic violence eleven years earlier.  He also had two prior DUI’s.

Police then asked our client why he beat up his girlfriend and he said he did not.  He was promptly arrested and taken to jail.  Police did not believe the girlfriend when she explained the cause of her injuries.  Police simply concluded that she was trying to protect her boyfriend.  After all, the police had received a 911 call from someone at the hotel reporting the two fighting.

Our client was eventually released and given a court date in the San Luis Obispo Superior Court for about six weeks later.  He hired Greg Hill & Associates and met with Greg on a Sunday afternoon, as the client worked six days per week and Sunday was the only time he had off. 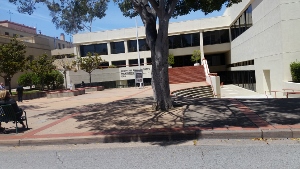 San Luis Obsipo Superior Courthouse
Greg listened to the client’s story and had the girlfriend sign a declaration explaining what happened.

Greg then appeared with the client at the arraignment for felony domestic violence.  The handling prosecutor was extremely rude and even angry at our client.  When Greg explained how the injuries were actually caused by a homeless person and not the client, the prosecutor sarcastically dismissed Greg’s explanation, saying “I’ve heard crap like that 1,000 times before.  Look, your client was drunk and is a drunk.  He even had a prior conviction for domestic violence, so he is capable of hitting a woman.”

The prosecutor then set forth her offer of two years in state prison, five years of formal probation and a $500 fine, plus penalties and assessments, as well as attending the 52 session batterer’s program.

Greg listened respectfully to the female prosecutor and then explained the situation to the client.

In fact, only three weeks had passed.

Greg began to propose a counter offer, wherein the charges would be reduced to a misdemeanor and the client would nevertheless attend the 52 session batterer’s program.  As Greg was proposing the terms, the prosecutor interrupted Greg several times with sarcastic comments and then even just hung up on Greg before he could finish making the counter offer.

At the second and third court appearances, the same prosecutor continued her tirade of insults and sarcasm, but each time, Greg continued the hearing.

At the fourth hearing, the prosecutor was out at a training seminar and a new, younger prosecutor was present.  Greg then negotiated a reduction of the charges to a misdemeanor and only 20 days of county jail, plus 104 Alcoholics Anonymous meetings, the 52 session batterers program and three years of probation.  The client was very happy, but still stunned, as was Greg, at the ferocity of the prosecutor.