Prop 47 Relief Does Not Guarantee a Shorter Sentence

Since November 4, 2014, when Proposition 47 was passed by California voters, many convicted felons currently serving prison sentences have petitioned for reclassification of their felony conviction(s) as a misdemeanor or as misdemeanors.  The practical benefit of the judge granting the petition(s) may mean release from custody.

This makes intuitive sense.  After all, if a person was convicted of a felony or entered a plea bargain with a sentence or negotiated term of custody being three years, for example, the change of the felony conviction to a misdemeanor implies the sentence can be no longer than one year.  The maximum sentence for a misdemeanor conviction is one year.

If the individual seeking relief has already served sixteen months of the three year term, it would seem that the petitioner should be released from custody, because he or she would have already served more than the maximum possible sentence.  This has happened regularly, as the reader of this article may be aware. 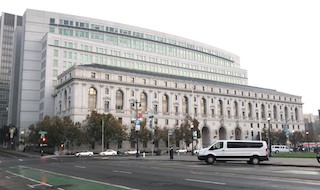 Court of Appeal First Appellate District San Francisco
However, is this required?  Must the judge change the original sentence if the petition for reclassification is granted?  Must a lower sentence replace the longer, felony sentence?
The case of Jesse Aloisius Roach put this issue to the test.  Mr. Roach had been convicted and sentenced for multiple offenses in three separate cases.  In one case, in 2010, he was charged with unlawful possession of ammunition (Penal Code § 12361(b)(1)), receiving stolen property (Penal Code § 496(a)), unlawful possession of a firearm by a felon (Penal Code § 12021(a)(1)), being under the influence of a controlled substance (Health and Safety Code § 11550(a)) and battery (Penal Code § 242).  He was apparently in a bar and “acting erratically.”  He plead guilty to possession of a firearm by a felon, a felony, and receiving stolen property, a felony at the time.

The trial court then sentenced Roach on all three cases to four years and four months in state prison.  The principal term of three years was for possession of methamphetamine.  The judge then imposed two consecutive eight month sentences for unlawful possession of a firearm and receiving stolen property.  There was a concurrent term of three years for evading a police officer.

Prop 47 was then passed and Roach petitioned to have his possession of methamphetamine charge and his receiving stolen property charge reduced to a misdemeanor.  The judge granted these, but did not lower the overall sentence.  It reasoned that when the possession of methamphetamine term of three years was reduced to a misdemeanor, the new principal charge was the three year sentence for evading a police officer and otherwise kept the eight month sentence for possession of a firearm and receiving stolen property.

Roach appealed the sentence as being unlawful.  He appealed to the First Appellate District, which affirmed the trial court in People v. Jesse Aloisius Roach (2016 DJDAR 4294).

The First Appellate District noted that while Prop 47 allowed resentencing once a felony charge is resentenced as a misdemeanor, Prop 47 did not mandate an overall shorter aggregate sentence when there are multiple parts to a sentence.

We find this opinion to be a good reminder that Prop 47 does have limitations and is not the panacea that so many perceive.
The citation for the First Appellate District Court ruling discussed above is People v. Jesse Aloisius Roach (1st App. Dist., 2016) 247 Cal.App.4th 178.
For more information about Prop 47 and resentencing, please click on the following articles:
Contact us.
Serving Torrance, Long Beach, Compton, Airport Courthouses and Other Courthouses.