There are some general principles that govern the conditions of probation that a judge may set.  It is well-known that judges have broad discretion to set conditions that “foster rehabilitation and protect public safety.” People v. Carbajal (1995) 10 Cal. 4th 1114, 1120; see also Penal Code § 1203.1(j).

Main Point:  A probation condition that a defendant not own, possess, or have in his custody or control a firearm is not unconstitutional, even if a knowledge requirement is omitted from the condition.

In using this discretion, judges may prohibit otherwise lawful conduct that the judge decides is “reasonably related to the crime of which defendant was convicted or to future criminality.”  People v. Lent (1975) 15 Cal. 3d 481,485.  Such conditions may even deprive or limit a constitutional right “[o]therwise enjoyed by the probationer who is not entitled to the same degree of constitutional protection as other citizens. “People v. Lopez (1998) 66 Cal. App. 4th 615, 624.  If such a condition affects a constitutional right, the condition must be “closely tailored” in its scope to address legitimate purposes only.  In re Sheena K. (2007) 40 Cal. 4th 875, 890.

The condition also must be sufficiently “precise” and unambiguous so probationer knows what is prohibited.  See Sheena K. at 889.  It cannot be vague.  In other words, it cannot be such that “men of common intelligence must necessarily guess at its meaning.”  This is a due process issue of proper notice. 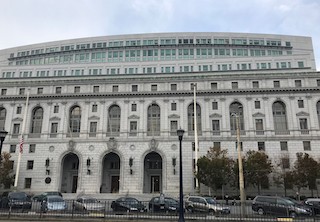 Court of Appeal First Appellate District San Francisco
The danger with a vague probation condition is that it “impermissibly delegates basic policy matters to policemen, judges and juries on an ad hoc and subjective basis, with the attendant dangers of arbitrary and discriminatory application.”
For example, there are certain probation conditions that are commonly vulnerable as improper due to being vague.  These are prohibitions on a probationer from associating with certain groups of people disapproved of by probation officers or parents.  Sheena K., at 892.  This is common in gang cases.

Another probation condition that is often challenged as improperly vague is a probation condition prohibiting probationer from being in certain types of areas, i.e. where there are firearms or dangerous or deadly weapons (or drugs). In re Victor L. (2010) 182 Cal. App. 4th 902, 911.

La Quincy Hall was convicted by a jury of possessing cocaine base for sale.  The judge placed him on three years of summary probation, subject to various conditions, one of which was that he “not own, possess, or have in… custody or control… any firearm whatsoever or any weapon that can be concealed on [his] person.”

Hall’s appeal was filed with the First Appellate District.  The First Appellate District began its analysis by commenting that Mr. Hall’s arguments conflate the legal necessary to establish a probation violation (“willful conduct,” rather than “unwitting violations”) with probation conditions relating to a category of associations, places or items.

As discussed above, a probation condition is unconstitutional when it prohibits someone from associating with, being at or having certain items when a person of average intelligence would have to guess to know if the conditions is violated.

In contrast, a court may not find that someone violated probation unless it finds the probationer acted with a willingness or purpose to commit the act, without regard to overall motive, intent to injure or knowledge of the acts prohibited character.  Willfulness “means that the prohibited act occur intentionally.” In re Jerry R. (1994) 29 Cal. App. 4th 1432, 1438, see also Pen. Code § 7, par. 1.  The term means the person knows what he or she is doing.

Here, the condition that Hall not own, possess or have in his custody or control any handgun, rifle, shotgun or any firearm is evaluated by the vagueness standard.  The First Appellate District found these terms were not vague.  A person of average intelligence knows what a handgun, riffle, shotgun or another firearm is.  It is not vague.  The modification proposed by Hall that a knowledge element be added to the conditions is not necessary.

The trial court’s judgment was consequently affirmed and Hall’s appeal was denied.